The Claim of the American Loyalists

The Claim of the American Loyalists – Joseph Galloway

When, at the beginning of the last quarter of the eighteenth century, it became increasingly evident that the thirteen American Colonies would revolt from Great Britain and attempt to establish their independence, and when it became necessary for all men to take sides on the great question, a large number of Americans of wealth and abilities remained loyal to their King. The motives which actuated these men were, of course, various; some were honorable, others selﬁsh. But to the ardent patriot, blinded by zeal for liberty, nothing could justify, or even palliate, such conduct. As a consequence, the Tories of the American Revolution suffered not less-in reputation than in estate, and names which would otherwise be found on the roll of honor in the history of Colonial America. are now but synonyms of reproach. One of the most active and inﬂuential of these Tories, and, consequently, one of the most despised, was Joseph Galloway, a Pennsylvania lawyer, politician, and pungent pamphleteer; but hardly more effectually has the soil of an English graveyard buried from sight his mortal remains than has the mass of opprobrium heaped up by partisan hatred hidden the memory of his deeds in the land of his birth. This pamphlet, which is the most well-known of all his pamphlets, contains a very clear exposition of the nature and necessity of the supreme authority of Parliament over the Colonies. It criticizes the acts of the Congress, and makes it very evident that its author would not have anything further to do with such assemblages. An attack upon this pamphlet, entitled “An Address to the Author of the ‘Candid Examination’ was soon issued, for which Dickinson was in part responsible. This was in turn answered by Mr. Galloway in a ‘Reply.’ 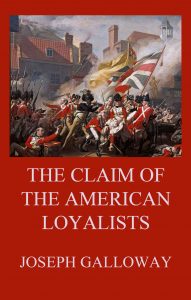 The Claim of the American Loyalists.

The Claim of the American Loyalists.

IN the year 1764, several tumults and insurrections against the authority of the Crown and the rights of Parliament took place in America. The houses and other property of divers persons, who had discharged their duty in attempting to carry that authority and those rights into execution, were destroyed, whereupon both Houses

Resolved, “That an humble Address be presented to his Majesty, to desire that he  would be graciously pleased to give instructions to the Governors of the several provinces where those tumults and insurrections have happened, that they should, in his Majesty’s name, require the Assemblies of the said provinces to make a proper recompence to those who have suffered in their persons or properties, in consequence of the said tumults and insurrections; and to assure his Majesty that they will, upon this and all occasions, support the lawful authority of the Crown, and the rights of Parliament.”

Resolved, “That all his Majesty’s subjects residing in the said colonies, who have manifested their desire to comply with, or to assist in carrying into execution the Act for laying a duty on stamps, or any other Act of Parliament, in the British Colonies in North America, have acted as dutiful and loyal subjects, &c. and are therefore entitled to, and will assuredly have the favour and protection of this House.”

In the year 1767, the insurrections in America encreasing, the House of Commons took into their consideration the state of North  America; and after full deliberation, came, among others, to the following resolves, viz.

Resolved, “That tumults and insurrections of the most dangerous nature have been raised and carried on in the North American colonies, in open defiance of the powers and dignity of his Majesty’s government, and in manifest violation of the legislative authority of this kingdom.”

Resolved, “That such persons, who, on account of the desire which they have manifested to comply with, or to assist in carrying into execution, any Acts of the Legislature of Great Britain, relating to the British colonies in North America, have suffered any injury or damage, ought to have full and ample compensation made to them for the same by the respective colonies in which such injuries or damages were sustained.”

Resolved, “That all his Majesty’s subjects residing in the said colonies, who have manifested their desire to comply with, or to assist in carrying into execution any Acts of the Legislature, relating to the said colonies in North America, have acted as dutiful and loyal subjects, and are therefore entitled to, and will assuredly have the protection of the House of Commons of Great Britain.”

The same House of Commons, impressed not only with a proper sense of the national justice which the Loyalists contend for, but with the policy and necessity of holding out distinguishing rewards, and marks of the national favour and approbation to those who had and should distinguish themselves by their zeal and fidelity,

Resolved, “That an humble Address be presented to his Majesty, that he will be graciously pleased to confer some marks of his royal favour on those Governors and Officers in the several colonies, who distinguished themselves by their zeal and fidelity in supporting the dignity of the Crown, the just rights of Parliament, and the supreme authority of Great Britain over the colonies, during the late disturbances in America.”

In the year 1775 the preceding tumults and insurrections against the authority of the Crown and the rights of Parliament, encreased to “open and avowed rebellion.” The leaders assumed the rights of independent legislation, of judicial enquiry, sentence, and execution. The prevalence of the power and violence of the insurgents was such, that, in a little time, those who appeared desirous to  support the authority of the Crown and rights of Parliament, or refused to unite with the insurgents, were disarmed, tarred, feathered, and inhumanly treated. The King’s forts were dismantled. The Governors and the Officers of the Crown, who had continued faithful to their trust, together with all others who had opposed the sedition, were reduced to the alternative of escaping from the tyranny, or of being imprisoned in loathsome dungeons or polluted mines, in which situations numbers have perished. Whereupon his Majesty laid this state of the colonies before the two Houses of Parliament, who concurred in assuring his Majesty, “That it was their fixed resolution, at the hazard of their lives and properties, to stand by his Majesty, against all rebellious attempts, in maintenance of his just rights, and of the two Houses of Parliament.”—And the aids were accordingly granted for that purpose.

In pursuance of these spirited measures of the Parliament, his Majesty, on the 23d of August in the same year, published a proclamation at St. James’s, in which, after reciting that an “open and avowed rebellion existed in America,” as the reason of the proclamation, his Majesty adds, “To the end,  therefore, that none of our subjects may neglect or violate their duty through ignorance thereof, or through any doubt of the protection which the law will afford to their loyalty and zeal, We have thought fit, by the advice of our Privy Council, to issue this proclamation, hereby declaring, that not only all our Officers, civil and military, are obliged to exert their utmost endeavours to suppress the rebellion, but that all the subjects of our realm, and the dominions thereunto belonging, are bound by law to be aiding and assisting in the suppression of the rebellion, and to disclose and make known all traiterous conspiracies and attempts against our Crown and dignity. And we do accordingly strictly charge and command all our Officers, civil and military, and all other our obedient and loyal subjects, to use their utmost endeavours to withstand and suppress such rebellion,” &c.

In the same year General Gage, Commander in Chief of the British forces in America, issued his proclamation, declaring, “that all those who should protect, assist, supply, conceal, or correspond with the insurgents, should be treated as rebels and traitors.”

The usurped legislatures of the several colonies, in their turn, passed laws, declaring, “That all persons who should aid, assist, or correspond with the subjects of Great Britain, should be adjudged guilty of high treason against their authorities.” And under these laws they attainted the persons, and confiscated the property, of all who adhered to their allegiance, or gave the least aid or assistance towards supporting “the authority of the Crown, or rights of Parliament.”

The critical and dangerous predicament in which these transactions placed the Loyalists, is not easily described. General Burgoyne, who was on the spot, has attempted to give some idea of the dreadful scene, which he declares to consist of “arbitrary imprisonment, confiscation of property, persecution and torture, unprecedented in the Inquisition of Rome. These are inflicted,” continues the General, “by Assemblies and Committees, who dare to style themselves friends to liberty, upon the most faithful subjects, without distinction of age or sex, for the sole crime, often for the sole suspicion, of having adhered in principle to the government under which they were born, and to which,  by every tie, human and divine, they owed allegiance.”

Notwithstanding this critical and dreadful situation into which the Loyalists were drawn by their confidence in his Majesty’s proclamation, and the assurances of Parliament; and notwithstanding many had suffered death, and numbers were languishing in dungeons and mines; the Commissioners of his Majesty and Parliament, and Commanders in Chief acting under his Majesty’s authority, did not cease to call on those who survived to adhere to their allegiance, and for their assistance.

In the year 1776, Lord Viscount Howe Ref. 003 published a proclamation, and as a farther and more especial encouragement expressly declared, “That due consideration should be had to the meritorious services of all persons who should aid and assist in restoring the public tranquillity, and that every suitable encouragement should be given for promoting such measures as should be conducive to the establishment of civil government and peace.”

In the same year, two other proclamations were issued by Lord and General Howe, and  a declaration by the latter in the year following, calling on the people to discharge their duties as subjects.

In the year 1778, his Majesty’s Commissioners acting under the authority of Parliament, in their manifesto and letter to Henry Lawrens, President of Congress, which they afterwards published throughout America, declare, that a “regard must be paid to the many who, from affection to Great Britain, have exposed themselves to suffer in this contest, and to whom Great Britain owes support at every expence of blood and treasure.”