The Constitutional Documents of the Puritan Revolution

The Constitutional Documents of the Puritan Revolution – Samuel Rawson Gardiner

In this volume are reprinted for convenient reference more than ninety documents which are “intended to serve either as a basis for the study of the constitutional history of an important period, or as a companion to the political history of the time.” With the exception of four, mentioned in the preface, they are taken from books that are beyond the reach of most students unless they have access to large and well-equipped libraries The whole is prefaced by a concise account of the period, so that we have at hand what might be compared to the finder on a telescope. Among the papers are the following, of which we have often heard, and which we can here examine that they may throw light upon our understanding of the history of the period : The Declaration of Sports, the Scottish National Covenant, the Root and Branch Petition, the Solemn League and Covenant, the Self-denying Ordinance. 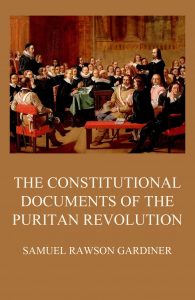 The Constitutional Documents of the Puritan Revolution.

The Constitutional Documents of the Puritan Revolution.

Revolutions, no less than smaller political changes, are to be accounted for as steps in the historical development of nations. They are more violent, and of longer duration, in proportion to the stubborn resistance opposed to them by the institutions which stand in their way; and the stubbornness of that resistance is derived from the services which the assailed institutions have rendered in the past, and which are remembered in their favour after they have ceased to be applicable to the real work of the day, or at least have become inapplicable without serious modification.

On the other hand, many who, throwing off the conservatism of habit, have bent themselves to sweep away the hindrances which bar the path of political progress, show an eagerness to put all established authority to the test, and to replace all existing institutions by new ones more in accordance with their ideal of a perfect State—an ideal which, under all circumstances, is necessarily imperfect. Revolutions, therefore, unavoidably teem with disappointment to their promoters. Schemes are carried out, either blundering in themselves or too little in accordance with the general opinion of the time to root themselves in the conscience of the nation; and, before many years have passed away, those who were the most ardent revolutionists, looking back upon their baffled hopes, declare that nothing worthy of the occasion has been accomplished.

The historian writing in a later generation is distracted neither by these buoyant hopes, nor by this melancholy despair. He knows, on the one hand, that, in great measure, the dreams of the idealists were but anticipations of future progress; and on the other hand, that the conservative misgivings of those who turned back were but the instrument through which the steadiness of progress indispensable to all healthy growth was maintained. A Revolution, in short, as an object of study, has an unrivalled attraction for him, not because it is exciting, but because it reveals more clearly than smaller changes the law of human progress.

One feature, therefore, is common to all Revolutions, that the nation in which they appear is content, perhaps after years of agitation, with just so much change as is sufficient to modify or abolish the institution which, so to speak, rankles in the flesh of the body politic. In the French Revolution, for instance, the existence of privileged classes was the evil which the vast majority of the nation was resolved to eradicate; and after blood had been shed in torrents, the achievement of equality under a despot satisfied, for a time at least, this united demand of the nation. Not the taking of the Bastille nor the execution of Louis XVI, but the night of August 4, when feudal privileges were thrown to the winds, was the central fact of the French Revolution. It was of the essence of the movement that there should cease to be privileged orders. It was a secondary consequence that the King’s authority was restricted or his person misused.

In the English Revolution, on the other hand, it was of the essence of the movement that the authority of the King should be restricted. The Kingship had done too much service in the recent past, and might do too much service again, to be absolutely abolished, and there was no widespread desire for any social improvements. The abolition of the House of Lords and the sweeping away of Episcopacy were secondary consequences of the movement. Its central facts are to be traced in the legislation of the first months of the Long Parliament, especially in the Triennial Act, the Tonnage and Poundage Act, and the Acts for the abolition of the Star Chamber and the High Commission. Then, just as in the French Revolution the Reign of Terror followed upon the abolition of privileges on account of the suspicion that those who had lost by the change were conspiring with foreign armies to get them back; so in the English Revolution there followed, first the Civil War and then the trial and execution of the King, on account of the suspicion that Charles was personally unwilling to consent to the loss of power and was conspiring with foreign armies to recover it.

The authority inherited by Charles at his accession was derived from the Tudor monarchy, which had come into power in defence of the middle classes against the great landowners, and had maintained itself in power as the champion of a National Church against a foreign ecclesiastical organisation backed by foreign governments. No such conflict could be successfully waged without reliance on spiritual forces, as well as on the craving for the material advantages to be obtained by casting off the oppressions of the nobility at home or by repelling invaders from abroad. To some extent the spiritual force grew out of the struggle itself, and the exaggerated expressions of loyalty to the wearer of the crown, which fall so strangely on modern ears, were but the tokens of a patriotic tide of feeling which was indeed very far from clearing away evil passions, but which at all events did something to elevate the men who were subject to them. In the main, however, the spiritual force which bore Elizabeth to triumph was religious zeal, or at least zeal which was permeated by the influence of religion.

Of this combined effort of patriotism and religion the Tudor institutions bore the impress. Not only were the judges removable by the Crown, but the Court of Star Chamber, which could fine, imprison, and in certain cases sentence to the pillory, without the intervention of a jury, was composed of all the members of the Privy Council and of two of the judges, thus enabling the Sovereign to secure the decision in cases in which he was personally affected by a court in manifest dependence on himself. The same thing may be said of the Court of High Commission, which dealt with ecclesiastical offences and in which the judicial authority was practically exercised by the Bishops and the lawyers of the Ecclesiastical Courts, as the laymen named in the commission seldom or never attended to their duties. Again, the right exercised by Elizabeth of levying Impositions, or Customs-duties not voted by Parliament, was the germ of an unparliamentary revenue which might make it needless, except in times of great necessity, to consult Parliament at all. It is true that Elizabeth exercised her powers with extreme sagacity and moderation, and that the nation, confident in her leadership, had not been ready to take offence; but it was certain, that if the time should arrive when a ruler less trusted and less respected was on the throne, there would be a strong disposition to lessen his authority, especially if, as was the case at the opening of the seventeenth century, the reasons for entrusting the Crown with such extensive powers had ceased to exist.

This was precisely what happened during the twenty-two years of the reign of James I. James was out of touch with the national feeling, and though he was often wiser in his aims than the House of Commons, he usually sought to attain them in an unwise way. He was not tyrannical, but his policy and his conduct struck no roots in the heart of the nation; and it soon became impossible to regard him as in any sense a leader of the national action. At the same time his financial difficulties, caused partly by an unavoidable growth of expenditure, but partly also by his lavish generosity to his favourites, led him to press the real or supposed rights of the Crown farther than Elizabeth had cared to press them. Twice in his reign he raised a Benevolence, not indeed by positive order under the Great Seal, but by invitation conveyed in letters from the Privy Council. The most important financial step taken by him, however, was the levy of largely increased Impositions. Elizabeth had, indeed, for special reasons, levied a few; and one of these, the Imposition on currants, was in 1607 the subject of a trial in the Court of Exchequer, known as Bates’s case. Bates, a merchant who refused to pay the duty, on the ground that the King had no legal power to take it without a grant from Parliament, was declared to be in the wrong, and the Crown found itself, by the opinion of the Court which was constitutionally entrusted with the decision of such questions, entitled to raise, in addition to the Tonnage and Poundage—which, according to established precedent, had been voted to James for life by the first Parliament of his reign—as much revenue from exports and imports as the amount of the consumption of foreign articles would permit.