Code Napoleon, the first code of the French civil law, known at first as the Code civil des Français, was promulgated in its entirety by a law of the 30th Ventose in the year XII. (31st of March 1804). The influence of the Code Civil has been very great, not only in France but also abroad. Belgium has preserved it, and the Rhine provinces only ceased to be subject to it on the promulgation of the civil code of the German empire. Its ascendancy has been due chiefly to the clearness of its provisions, and to the spirit of equity and equality which inspires them. Numerous more recent codes have also taken it as a model: the Dutch code, the Italian, and the code of Portugal; and, more remotely, the Spanish code, and those of the Central and South American republics. 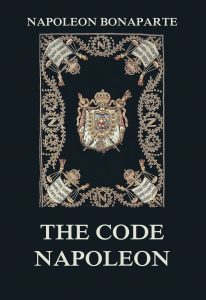 Napoleon set out to reform the French legal system in accordance with the ideas of the French Revolution, because the old feudal and royal laws seemed confusing and contradictory. Before the Napoleonic Code, France did not have a single set of laws; law consisted mainly of local customs, which had sometimes been officially compiled in “customals” (coutumes), notably the Coutume de Paris. There were also exemptions, privileges, and special charters granted by the kings or other feudal lords. During the Revolution, the last vestiges of feudalism were abolished.

Specifically, as to civil law, the many different bodies of law used in different parts of France were replaced by a single legal code. Jean-Jacques Régis de Cambacérès led this drafting process. His drafts of 1793 (for which he had been given a one-month deadline), 1794, and 1799, however, were adopted only piecemeal by a National Convention more concerned about the turmoil resulting from the various wars and strife with other European powers.

A fresh start was made after Napoleon came to power in 1799. A commission of four eminent jurists was appointed in 1800, including Louis-Joseph Faure and chaired by Cambacérès (now Second Consul), and sometimes by the First Consul, Napoleon himself. The Code was complete by 1801, after intensive scrutiny by the Council of State, but was not published until 21 March 1804. It was promulgated as the “Civil Code of the French” (Code civil des Français), but was renamed “the Napoleonic Code” (Code Napoléon) from 1807 to 1815, and once again after the Second French Empire.

The process developed mainly out of the various customals, but was inspired by Justinian’s sixth-century codification of Roman law, the Corpus Iuris Civilis and, within that, Justinian’s Code (Codex). The Napoleonic Code, however, differed from Justinian’s in important ways: it incorporated all kinds of earlier rules, not only legislation; it was not a collection of edited extracts, but a comprehensive rewrite; its structure was much more rational; it had no religious content; and it was written in the vernacular.

The development of the Napoleonic Code was a fundamental change in the nature of the civil law system, making laws clearer and more accessible. It also superseded the former conflict between royal legislative power and, particularly in the final years before the Revolution, protests by judges representing views and privileges of the social classes to which they belonged. Such conflict led the Revolutionaries to take a negative view of judges making law.

This is reflected in the Napoleonic Code provision prohibiting judges from deciding a case by way of introducing a general rule (Article 5), since the creation of general rules is an exercise of legislative and not of judicial power. In theory, there is thus no case law in France. However, the courts still had to fill in the gaps in the laws and regulations and, indeed, were prohibited from refusing to do so (Article 4). Moreover, both the code and legislation have required judicial interpretation. Thus a vast body of judicially-created law (jurisprudence) has come into existence. There is no rule of stare decisis (binding precedent) in French law, but decisions by important courts have become more or less equivalent to case law.