This edition includes an extensive primer on the author’s life and works, as well as a detailed essay about the history of the Longfellow translation. The “Divina Commedia” is an allegory of human life, in the form of a vision of the world beyond the grave, written avowedly with the object of converting a corrupt society to righteousness: “to remove those living in this life from the state of misery, and lead them to the state of felicity”. It is composed of a hundred cantos, written in the measure known as terza rima, with its normally hendecasyllabic lines and closely linked rhymes, which Dante so modified from the popular poetry of his day that it may be regarded as his own invention. He is relating, nearly twenty years after the event, a vision which was granted to him (for his own salvation when leading a sinful life) during the year of jubilee, 1300, in which for seven days (beginning on the morning of Good Friday) he passed through hell, purgatory, and paradise, spoke with the souls in each realm, and heard what the Providence of God had in store for himself and to world. 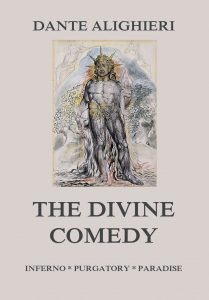 Structure and story of The Divine Comedy (from Wikipedia):

The Divine Comedy is composed of 14,233 lines that are divided into three canticas (Italian plural cantiche) – Inferno (Hell), Purgatorio (Purgatory), and Paradiso (Paradise) – each consisting of 33 cantos (Italian plural canti). An initial canto, serving as an introduction to the poem and generally considered to be part of the first cantica, brings the total number of cantos to 100. It is generally accepted, however, that the first two cantos serve as a unitary prologue to the entire epic, and that the opening two cantos of each cantica serve as prologues to each of the three canticas.

The number “three” is prominent in the work, represented in part by the number of canticas and their lengths. Additionally, the verse scheme used, terza rima, is hendecasyllabic (lines of eleven syllables), with the lines composing tercets according to the rhyme scheme aba, bcb, cdc, ded, ….

Written in the first person, the poem tells of Dante’s journey through the three realms of the dead, lasting from the night before Good Friday to the Wednesday after Easter in the spring of 1300. The Roman poet Virgil guides him through Hell and Purgatory; Beatrice, Dante’s ideal woman, guides him through Heaven. Beatrice was a Florentine woman whom he had met in childhood and admired from afar in the mode of the then-fashionable courtly love tradition, which is highlighted in Dante’s earlier work La Vita Nuova.

The structure of the three realms follows a common numerical pattern of 9 plus 1, for a total of 10: 9 circles of the Inferno, followed by Lucifer contained at its bottom; 9 rings of Mount Purgatory, followed by the Garden of Eden crowning its summit; and the 9 celestial bodies of Paradiso, followed by the Empyrean containing the very essence of God. Within each group of 9, 7 elements correspond to a specific moral scheme, subdivided into three subcategories, while 2 others of greater particularity are added to total nine. For example, the seven deadly sins of the Catholic Church that are cleansed in Purgatory are joined by special realms for the Late repentant and the excommunicated by the church. The core seven sins within Purgatory correspond to a moral scheme of love perverted, subdivided into three groups corresponding to excessive love (Lust, Gluttony, Greed), deficient love (Sloth), and malicious love (Wrath, Envy, Pride).[citation needed]

In central Italy’s political struggle between Guelphs and Ghibellines, Dante was part of the Guelphs, who in general favored the Papacy over the Holy Roman Emperor. Florence’s Guelphs split into factions around 1300: the White Guelphs and the Black Guelphs. Dante was among the White Guelphs who were exiled in 1302 by the Lord-Mayor Cante de’ Gabrielli di Gubbio, after troops under Charles of Valois entered the city, at the request of Pope Boniface VIII, who supported the Black Guelphs. This exile, which lasted the rest of Dante’s life, shows its influence in many parts of the Comedy, from prophecies of Dante’s exile to Dante’s views of politics, to the eternal damnation of some of his opponents.

The last word in each of the three canticas is stelle (“stars”).

The poem begins on the night before Good Friday in the year 1300, “halfway along our life’s path” (Nel mezzo del cammin di nostra vita). Dante is thirty-five years old, half of the biblical lifespan of 70 (Psalms 89:10, Vulgate), lost in a dark wood (understood as sin), assailed by beasts (a lion, a leopard, and a she-wolf) he cannot evade, and unable to find the “straight way” (diritta via) – also translatable as “right way” – to salvation (symbolized by the sun behind the mountain). Conscious that he is ruining himself and that he is falling into a “low place” (basso loco) where the sun is silent (‘l sol tace), Dante is at last rescued by Virgil, and the two of them begin their journey to the underworld. Each sin’s punishment in Inferno is a contrapasso, a symbolic instance of poetic justice; for example, in Canto XX, fortune-tellers and soothsayers must walk with their heads on backwards, unable to see what is ahead, because that was what they had tried to do in life:

they had their faces twisted toward their haunches
and found it necessary to walk backward,
because they could not see ahead of them.
… and since he wanted so to see ahead,
he looks behind and walks a backward path.
Allegorically, the Inferno represents the Christian soul seeing sin for what it really is, and the three beasts represent three types of sin: the self-indulgent, the violent, and the malicious. These three types of sin also provide the three main divisions of Dante’s Hell: Upper Hell, outside the city of Dis, for the four sins of indulgence (lust, gluttony, avarice, anger); Circle 7 for the sins of violence; and Circles 8 and 9 for the sins of malice (fraud and treachery). Added to these are two unlike categories that are specifically spiritual: Limbo, in Circle 1, contains the virtuous pagans who were not sinful but were ignorant of Christ, and Circle 6 contains the heretics who contradicted the doctrine and confused the spirit of Christ. The circles number 9, with the addition of Satan completing the structure of 9 + 1 = 10.

Having survived the depths of Hell, Dante and Virgil ascend out of the undergloom to the Mountain of Purgatory on the far side of the world. The Mountain is on an island, the only land in the Southern Hemisphere, created by the displacement of rock which resulted when Satan’s fall created Hell (which Dante portrays as existing underneath Jerusalem). The mountain has seven terraces, corresponding to the seven deadly sins or “seven roots of sinfulness.” The classification of sin here is more psychological than that of the Inferno, being based on motives, rather than actions. It is also drawn primarily from Christian theology, rather than from classical sources. However, Dante’s illustrative examples of sin and virtue draw on classical sources as well as on the Bible and on contemporary events.

Love, a theme throughout the Divine Comedy, is particularly important for the framing of sin on the Mountain of Purgatory. While the love that flows from God is pure, it can become sinful as it flows through humanity. Humans can sin by using love towards improper or malicious ends (Wrath, Envy, Pride), or using it to proper ends but with love that is either not strong enough (Sloth) or love that is too strong (Lust, Gluttony, Greed). Below the seven purges of the soul is the Ante-Purgatory, containing the Excommunicated from the church and the Late repentant who died, often violently, before receiving rites. Thus the total comes to nine, with the addition of the Garden of Eden at the summit, equaling ten.

Allegorically, the Purgatorio represents the Christian life. Christian souls arrive escorted by an angel, singing In exitu Israel de Aegypto. In his Letter to Cangrande, Dante explains that this reference to Israel leaving Egypt refers both to the redemption of Christ and to “the conversion of the soul from the sorrow and misery of sin to the state of grace.” Appropriately, therefore, it is Easter Sunday when Dante and Virgil arrive.

The Purgatorio is notable for demonstrating the medieval knowledge of a spherical Earth. During the poem, Dante discusses the different stars visible in the southern hemisphere, the altered position of the sun, and the various timezones of the Earth. At this stage it is, Dante says, sunset at Jerusalem, midnight on the River Ganges, and sunrise in Purgatory.

After an initial ascension, Beatrice guides Dante through the nine celestial spheres of Heaven. These are concentric and spherical, as in Aristotelian and Ptolemaic cosmology. While the structures of the Inferno and Purgatorio were based on different classifications of sin, the structure of the Paradiso is based on the four cardinal virtues and the three theological virtues.

The first seven spheres of Heaven deal solely with the cardinal virtues of Prudence, Fortitude, Justice and Temperance. The first three describe a deficiency of one of the cardinal virtues – the Moon, containing the inconstant, whose vows to God waned as the moon and thus lack fortitude; Mercury, containing the ambitious, who were virtuous for glory and thus lacked justice; and Venus, containing the lovers, whose love was directed towards another than God and thus lacked Temperance. The final four incidentally are positive examples of the cardinal virtues, all led on by the Sun, containing the prudent, whose wisdom lighted the way for the other virtues, to which the others are bound (constituting a category on its own). Mars contains the men of fortitude who died in the cause of Christianity; Jupiter contains the kings of Justice; and Saturn contains the temperate, the monks who abided by the contemplative lifestyle. The seven subdivided into three are raised further by two more categories: the eighth sphere of the fixed stars that contain those who achieved the theological virtues of faith, hope and love, and represent the Church Triumphant – the total perfection of humanity, cleansed of all the sins and carrying all the virtues of heaven; and the ninth circle, or Primum Mobile (corresponding to the Geocentricism of Medieval astronomy), which contains the angels, creatures never poisoned by original sin. Topping them all is the Empyrean, which contains the essence of God, completing the 9-fold division to 10.

Dante meets and converses with several great saints of the Church, including Thomas Aquinas, Bonaventure, Saint Peter, and St. John. The Paradiso is consequently more theological in nature than the Inferno and the Purgatorio. However, Dante admits that the vision of heaven he receives is merely the one his human eyes permit him to see, and thus the vision of heaven found in the Cantos is Dante’s personal vision.

The Divine Comedy finishes with Dante seeing the Triune God. In a flash of understanding that he cannot express, Dante finally understands the mystery of Christ’s divinity and humanity, and his soul becomes aligned with God’s love:

But already my desire and my will
were being turned like a wheel, all at one speed,
by the Love which moves the sun and the other stars.