The Dolorous Passion of Our Lord Jesus Christ

The meditations in this book will probably rank high among many similar works which the contemplative love of Jesus has produced; but it is our duty here plainly to affirm that they have no pretensions whatever to be regarded as history. They are but intended to take one of the lowest places among those numerous representations of the Passion which have been given us by pious writers and artists, and to be considered at the very utmost as the Lenten meditations of a devout nun, related in all simplicity, and written down in the plainest and most literal language, from her own dictation. To these meditations, she herself never attached more than a mere human value, and never related them except through obedience, and upon the repeated commands of the directors of her conscience. 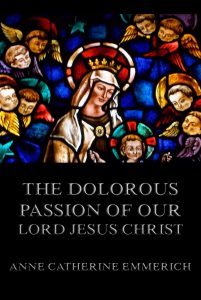 The Dolorous Passion of Our Lord Jesus Christ

The Dolorous Passion of Our Lord Jesus Christ.

The passion of Jesus (from Wikipedia):

In Christianity, the Passion (from Late Latin: passionem “suffering, enduring”) is the short final period in the life of Jesus covering his entrance visit to Jerusalem and leading to his crucifixion on Mount Calvary, defining the climactic event central to Christian doctrine of Salvation History.

The commemoration begins with the portent grievance of the Blessed Virgin Mary, followed by his triumphal entry into Jerusalem and includes his institution of the Eucharist at Last Supper, his bleeding and Agony in the Garden followed by his arrest by the Sanhedrin priests and ultimate trial of Pontius Pilate. Those parts of the four Gospels that describe these events, as well as the non-canonical Gospel of Peter, are known as the “Passion narratives”. In the liturgical calendar of the Roman Catholic Church, the Passion is commemorated in Holy Week, beginning on Friday of Sorrows, the Palm Sunday and culminating on his death on Good Friday.

The word passion has since taken on a more general application and now may also apply to accounts of the suffering and death of Christian martyrs, sometimes using the Latin form passio.