The Ecclesiastical History of England

The Ecclesiastical History of England – The Honorable Bede

Bede’s best-known work is the Ecclesiastical History of England. Completed in about 731, it consists of five books, in which he sketches the history of England from Caesar’s invasion in 55 B.C. through St. Augustine’s missions, the development of Christianity in Kent and the Council of Whitby up to his own days. 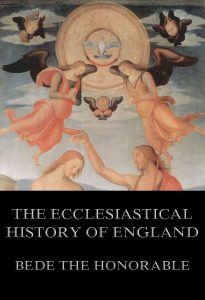 The Ecclesiastical History of England

The Ecclesiastical History of England.

An overview of the book (from Wikipedia):

The Historia ecclesiastica gentis Anglorum, or An Ecclesiastical History of the English People is Bede’s best-known work, completed in about 731. The first of the five books begins with some geographical background and then sketches the history of England, beginning with Caesar’s invasion in 55 BC. A brief account of Christianity in Roman Britain, including the martyrdom of St Alban, is followed by the story of Augustine’s mission to England in 597, which brought Christianity to the Anglo-Saxons. The second book begins with the death of Gregory the Great in 604, and follows the further progress of Christianity in Kent and the first attempts to evangelise Northumbria. These encountered a setback when Penda, the pagan king of Mercia, killed the newly Christian Edwin of Northumbria at the Battle of Hatfield Chase in about 632. The setback was temporary, and the third book recounts the growth of Christianity in Northumbria under kings Oswald and Oswy. The climax of the third book is the account of the Council of Whitby, traditionally seen as a major turning point in English history. The fourth book begins with the consecration of Theodore as Archbishop of Canterbury, and recounts Wilfrid’s efforts to bring Christianity to the kingdom of Sussex. The fifth book brings the story up to Bede’s day, and includes an account of missionary work in Frisia, and of the conflict with the British church over the correct dating of Easter. Bede wrote a preface for the work, in which he dedicates it to Ceolwulf, king of Northumbria. The preface mentions that Ceolwulf received an earlier draft of the book; presumably Ceolwulf knew enough Latin to understand it, and he may even have been able to read it. The preface makes it clear that Ceolwulf had requested the earlier copy, and Bede had asked for Ceolwulf’s approval; this correspondence with the king indicates that Bede’s monastery had excellent connections among the Northumbrian nobility.