The Exploits of Brigadier Gerard

The adventures of the brave, vain, light-hearted French soldier, a Gil Blas of the Grande Armée, are carried on chapter by chapter, each complete in itself, and you may take up the book at any point, as you can Le Sage’s immortal tale, and find it entertaining. We read how the Brigadier gets into Dartmoor prison, and how he gets out again; how he fights brigands and makes his way into the Castle of Gloom, the abode of heroes of the Reign of Terror; how he rescues ladies, and takes part in every kind of midnight exploit, coming miraculously out of each with a whole skin. There is a flavor of Dumas’s Musketeers in the life of the redoubtable Brigadier Gerard, a typical Napoleonic soldier, more fortunate than many of his compeers because some of his Homeric exploits were accomplished under the personal observation of the Emperor. 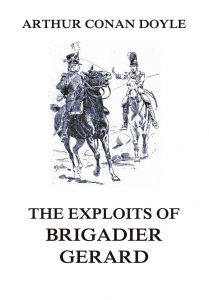 The Exploits of Brigadier Gerard

The Exploits of Brigadier Gerard.