The Four Noble Truths And The Eightfold Path

The Four Noble Truths And The Eightfold Path – Paul Carus

In this book Paul Carus compiles the fundamental teachings of the Buddha: the four Noble Truths, the Eightfold Path, and Buddha’s sermons and advice to his disciples. In this reading, Buddha explains how nirvana can result from the discipline of the Noble Eightfold Path. In his teachings, Buddha did not claim divine authority, instead he emphasizes that each person should trust his own experience. (Courtesy of lander.edu). 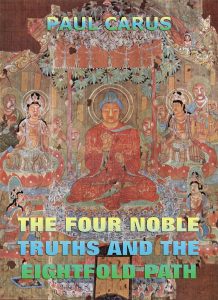 The Four Noble Truths And The Eightfold Path

The Four Noble Truths And The Eightfold Path.

Carus and the Religion of Science (from Wikipedia):

Carus was a follower of Benedictus de Spinoza; he was of the opinion that Western thought had fallen into error early in its development in accepting the distinctions between body and mind and the material and the spiritual. (Kant’s phenomenal and noumenal realms of knowledge; Christianity’s views of the soul and the body, and the natural and the supernatural). Carus rejected such dualisms, and wanted science to reestablish the unity of knowledge. The philosophical result he labeled Monism.

His version of monism is more closely associated with a kind of pantheism, although it was occasionally identified with positivism. He regarded every law of nature as a part of God’s being. Carus held that God was the name for a cosmic order comprising “all that which is the bread of our spiritual life.” He held the concept of a personal God as untenable. He acknowledged Jesus Christ as a redeemer, but not as the only one, for he believed that other religious founders were equally endowed with similar qualities.

His beliefs attempted to steer a middle course between idealistic metaphysics and materialism. He differed with metaphysicians because they “reified” words and treated them as if they were realities, and he objected to materialism because it ignored or overlooked the importance of form. Carus emphasized form by conceiving of the divinity as a cosmic order. He objected to any monism which sought the unity of the world, not in the unity of truth, but in the oneness of a logical assumption of ideas. He referred to such concepts as henism, not monism.

Carus held that truth was independent of time, human desire, and human action. Therefore, science was not a human invention, but a human revelation which needed to be apprehended; discovery meant apprehension; it was the result or manifestation of the cosmic order in which all truth were ultimately harmonious.