“The Great Shadow”is a romance with an historical background of the Scottish border in the time of Napoleon, who personifies the great shadow that hung over the land and filled men’s hearts with fears of an invasion. The principal figure in the tale is a young girl, wayward, impulsive, romantic, fickle, captivating, who, after having had two lovers among her fellows, runs off with a gallant Frenchman whose stories of the great world inflame her imagination. This mysterious stranger, who stays with the Scotch family for a long time, turns out to be an aide-de-camp to Napoleon, and when his chief returns from Elba he hastens to join him. The two young fellows meet him, and one of them gives him his death wound on the field of Waterloo, of which there is a graphic description from the point of view of the men who fought in the ranks. 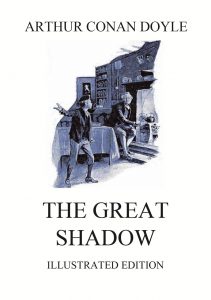 Instead of Sherlock Holmes being the main character, the story follows Jack Colder, who claims his only notable childhood experience was when he accidentally prevented a burglary during an attempt to escape a boarding school. This event caught Jim Horscroft and the two become friends. Once Jim goes off to medical school, Jack reunites with his cousin Edie, who found herself in a lot of money due to her father’s death. Jack takes a liking to Edie, but is deterred when Edie shows less enthusiasm and shows great attraction to men in battle. Upon hearing this, Jack insists that he will become a soldier despite both of his parents’ disapproval. Jack ultimately asks Edie to marry him. It is at this time that Jim returns to West Inch, and he quickly takes a liking to Edie, who seems much more attracted to Jim. When Jack reveals to Jim that the two are engaged he is quickly off put and sinks into depression combined with drunkenness. After a couple days, Jim recovers and is caught embracing Edie by Jack. The two argue and ultimately decide to have Edie choose. Edie chooses Jim and the two become engaged. The arrival of Lapp, a mystery French man who arrives on a small ship interrupts the peace as he claimed to have been in a ship wreck and was traveling for three days lost at sea. Jack offers him food and a place to stay while Jim is a little more hesitant. The boys quickly realize Lapp is very rich and has many battle scores that are only outmatched by his endless war stories that charm everyone, including Edie. Lapp claims he is to stay there until he is needed. Lapp becomes a regular in the community, Jack suspects Lapp is a spy after he catches him sneaking around on multiple occasions. When Jim goes off to finish school and get his diploma, Edie reveals to Jack that she had married Lapp, and the next day Lapp leaves on a ship and reveals in a note that he actually is Bonaventure De Lissac who is Napolon’s aid. This angers Jim great as he learns Napoleon has escaped and is on the move. Jim offers his service to Major Elliot, to which Jack joins quickly. Major Elliot trains the boys as they prepare for the Battle of Waterloo. The French are described as having significant armor and were trained soldiers as opposed to the regiment Jack and Jim were a part of. The rest of the novel describes in vivid detail a soldier’s account of the Battle of Waterloo, with Jim and Jack walk from a half-mile away as the battle ensues before joining the battle at the very end. The ending of the book describes the French being defeated by the Duke of Wellington and Gebhard von Blucher.