It is a very enticing study in the manner of Dumas pere that Mr. Conan Doyle has written in “The Refugees.” Brightly conceived, carried through with spirit, gracefully and gaily written are the two strings that are woven together. In the earlier part we have a picturesque summary of events at the Court of Louis XIV about the fall of the Montespan and the marriage of the Maintenon. In the later part we have a rollicking tale of adventures in America during the close of the seventeenth century. “The Refugees” is a charming contribution to an admirable kind of literature. 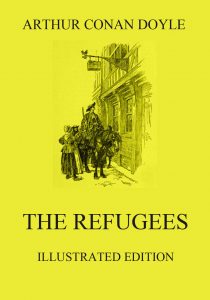 A short biography of the author (from Wikipedia):

Sir Arthur Ignatius Conan Doyle KStJ, DL (22 May 1859 – 7 July 1930) was a British writer and physician, most noted for his character Sherlock Holmes and his detective fiction, which are generally considered milestones in the field of crime fiction.

He is also known for writing the fictional adventures of Professor Challenger, another of his characters, and for propagating the mystery of the Mary Celeste. He was a prolific writer whose other works include fantasy and science fiction stories, plays, romances, poetry, non-fiction and historical novels.