‘The Haunted Hotel’ is a story which, like others of Mr. Wilkie Collins’s stories, fascinates the reader, and compels him to finish it at a sitting. It has, too, this merit, that as the story progresses one is forced to recall the facts of the earlier part, and see the object for which they were related and the bearing they have upon subsequent events. It is often possible to put together a mass of intricate details none of which is irrelevant, but it is a rare skill which can make it plain to a reader reading at full speed that they all had their necessity and proper effect. Few writers can do this so well as Mr. Wilkie Collins. The mystery in ‘The Haunted Hotel’ is grim enough to please a keen appetite for grisly horrors, without glutting it by matter of fact description. A good deal is left for imagination to fill up. Whether or not the reader is meant to guess the explanation of the courier’s disappearance, as he probably will if he is at all practiced in mysteries, is not of much importance. Having guessed it, he will still read with undiminished interest to see how it is worked out. There is, it seems, one defect in the story. It is a mystery with an explanation; but one particular fact which is not a mystery has no explanation…. 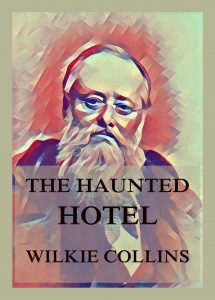 In the year 1860, the reputation of Doctor Wybrow as a London physician reached its highest point. It was reported on good authority that he was in receipt of one of the largest incomes derived from the practice of medicine in modern times.

One afternoon, towards the close of the London season, the Doctor had just taken his luncheon after a specially hard morning’s work in his consulting-room, and with a formidable list of visits to patients at their own houses to fill up the rest of his day—when the servant announced that a lady wished to speak to him.

‘I see no strangers out of consulting-hours. Tell her what the hours are, and send her away.’

‘Won’t go?’ The Doctor smiled as he repeated the words. He was a humourist in his way; and there was an absurd side to the situation which rather amused him. ‘Has this obstinate lady given you her name?’ he inquired.

‘No, sir. She refused to give any name—she said she wouldn’t keep you five minutes, and the matter was too important to wait till to-morrow. There she is in the consulting-room; and how to get her out again is more than I know.’

Doctor Wybrow considered for a moment. His knowledge of women (professionally speaking) rested on the ripe experience of more than thirty years; he had met with them in all their varieties—especially the variety which knows nothing of the value of time, and never hesitates at sheltering itself behind the privileges of its sex. A glance at his watch informed him that he must soon begin his rounds among the patients who were waiting for him at their own houses. He decided forthwith on taking the only wise course that was open under the circumstances. In other words, he decided on taking to flight.

‘Is the carriage at the door?’ he asked.

‘Very well. Open the house-door for me without making any noise, and leave the lady in undisturbed possession of the consulting-room. When she gets tired of waiting, you know what to tell her. If she asks when I am expected to return, say that I dine at my club, and spend the evening at the theatre. Now then, softly, Thomas! If your shoes creak, I am a lost man.’

He noiselessly led the way into the hall, followed by the servant on tip-toe.

Did the lady in the consulting-room suspect him? or did Thomas’s shoes creak, and was her sense of hearing unusually keen? Whatever the explanation may be, the event that actually happened was beyond all doubt. Exactly as Doctor Wybrow passed his consulting-room, the door opened—the lady appeared on the threshold—and laid her hand on his arm.

‘I entreat you, sir, not to go away without letting me speak to you first.’

The accent was foreign; the tone was low and firm. Her fingers closed gently, and yet resolutely, on the Doctor’s arm.

Neither her language nor her action had the slightest effect in inclining him to grant her request. The influence that instantly stopped him, on the way to his carriage, was the silent influence of her face. The startling contrast between the corpse-like pallor of her complexion and the overpowering life and light, the glittering metallic brightness in her large black eyes, held him literally spell-bound. She was dressed in dark colours, with perfect taste; she was of middle height, and (apparently) of middle age—say a year or two over thirty. Her lower features—the nose, mouth, and chin—possessed the fineness and delicacy of form which is oftener seen among women of foreign races than among women of English birth. She was unquestionably a handsome person—with the one serious drawback of her ghastly complexion, and with the less noticeable defect of a total want of tenderness in the expression of her eyes. Apart from his first emotion of surprise, the feeling she produced in the Doctor may be described as an overpowering feeling of professional curiosity. The case might prove to be something entirely new in his professional experience. ‘It looks like it,’ he thought; ‘and it’s worth waiting for.’

She perceived that she had produced a strong impression of some kind upon him, and dropped her hold on his arm.

‘You have comforted many miserable women in your time,’ she said. ‘Comfort one more, to-day.’

Without waiting to be answered, she led the way back into the room.

The Doctor followed her, and closed the door. He placed her in the patients’ chair, opposite the windows. Even in London the sun, on that summer afternoon, was dazzlingly bright. The radiant light flowed in on her. Her eyes met it unflinchingly, with the steely steadiness of the eyes of an eagle. The smooth pallor of her unwrinkled skin looked more fearfully white than ever. For the first time, for many a long year past, the Doctor felt his pulse quicken its beat in the presence of a patient.

Having possessed herself of his attention, she appeared, strangely enough, to have nothing to say to him. A curious apathy seemed to have taken possession of this resolute woman. Forced to speak first, the Doctor merely inquired, in the conventional phrase, what he could do for her.

The sound of his voice seemed to rouse her. Still looking straight at the light, she said abruptly: ‘I have a painful question to ask.’

Her eyes travelled slowly from the window to the Doctor’s face. Without the slightest outward appearance of agitation, she put the ‘painful question’ in these extraordinary words:

‘I want to know, if you please, whether I am in danger of going mad?’

Some men might have been amused, and some might have been alarmed. Doctor Wybrow was only conscious of a sense of disappointment. Was this the rare case that he had anticipated, judging rashly by appearances? Was the new patient only a hypochondriacal woman, whose malady was a disordered stomach and whose misfortune was a weak brain? ‘Why do you come to me?’ he asked sharply. ‘Why don’t you consult a doctor whose special employment is the treatment of the insane?’

She had her answer ready on the instant.

‘I don’t go to a doctor of that sort,’ she said, ‘for the very reason that he is a specialist: he has the fatal habit of judging everybody by lines and rules of his own laying down. I come to you, because my case is outside of all lines and rules, and because you are famous in your profession for the discovery of mysteries in disease. Are you satisfied?’

He was more than satisfied—his first idea had been the right idea, after all. Besides, she was correctly informed as to his professional position. The capacity which had raised him to fame and fortune was his capacity (unrivalled among his brethren) for the discovery of remote disease.

‘I am at your disposal,’ he answered. ‘Let me try if I can find out what is the matter with you.’

He put his medical questions. They were promptly and plainly answered; and they led to no other conclusion than that the strange lady was, mentally and physically, in excellent health. Not satisfied with questions, he carefully examined the great organs of life. Neither his hand nor his stethoscope could discover anything that was amiss. With the admirable patience and devotion to his art which had distinguished him from the time when he was a student, he still subjected her to one test after another. The result was always the same. Not only was there no tendency to brain disease—there was not even a perceptible derangement of the nervous system. ‘I can find nothing the matter with you,’ he said. ‘I can’t even account for the extraordinary pallor of your complexion. You completely puzzle me.’

‘The pallor of my complexion is nothing,’ she answered a little impatiently. ‘In my early life I had a narrow escape from death by poisoning. I have never had a complexion since—and my skin is so delicate, I cannot paint without producing a hideous rash. But that is of no importance. I wanted your opinion given positively. I believed in you, and you have disappointed me.’ Her head dropped on her breast. ‘And so it ends!’ she said to herself bitterly.

The Doctor’s sympathies were touched. Perhaps it might be more correct to say that his professional pride was a little hurt. ‘It may end in the right way yet,’ he remarked, ‘if you choose to help me.’

She looked up again with flashing eyes, ‘Speak plainly,’ she said. ‘How can I help you?’

‘Plainly, madam, you come to me as an enigma, and you leave me to make the right guess by the unaided efforts of my art. My art will do much, but not all. For example, something must have occurred—something quite unconnected with the state of your bodily health—to frighten you about yourself, or you would never have come here to consult me. Is that true?’

She clasped her hands in her lap. ‘That is true!’ she said eagerly. ‘I begin to believe in you again.’

‘Very well. You can’t expect me to find out the moral cause which has alarmed you. I can positively discover that there is no physical cause of alarm; and (unless you admit me to your confidence) I can do no more.’

She rose, and took a turn in the room. ‘Suppose I tell you?’ she said. ‘But, mind, I shall mention no names!’

‘There is no need to mention names. The facts are all I want.’

‘The facts are nothing,’ she rejoined. ‘I have only my own impressions to confess—and you will very likely think me a fanciful fool when you hear what they are. No matter. I will do my best to content you—I will begin with the facts that you want. Take my word for it, they won’t do much to help you.’

She sat down again. In the plainest possible words, she began the strangest and wildest confession that had ever reached the Doctor’s ears.