The story of two people who begin to love each other as boy and girl. Some mysterious agency seems to be at work, all through the story, in their behalf; for though apparently separated as children forever, they are brought together again by a most singular chain of circumstances. Apparitions and other strange hallucinations abound in the work. Altogether a pleasantly weird and odd story, and very much different from Wilkie Collins’ other novels. 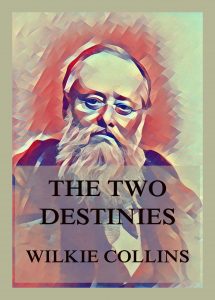 MANY years have passed since my wife and I left the United States to pay our first visit to England.

We were provided with letters of introduction, as a matter of course. Among them there was a letter which had been written for us by my wife’s brother. It presented us to an English gentleman who held a high rank on the list of his old and valued friends.

“You will become acquainted with Mr. George Germaine,” my brother-in-law said, when we took leave of him, “at a very interesting period of his life. My last news of him tells me that he is just married. I know nothing of the lady, or of the circumstances under which my friend first met with her. But of this I am certain: married or single, George Germaine will give you and your wife a hearty welcome to England, for my sake.”

The day after our arrival in London, we left our letter of introduction at the house of Mr. Germaine.

The next morning we went to see a favorite object of American interest, in the metropolis of England—the Tower of London. The citizens of the United States find this relic of the good old times of great use in raising their national estimate of the value of republican institutions. On getting back to the hotel, the cards of Mr. and Mrs. Germaine told us that they had already returned our visit. The same evening we received an invitation to dine with the newly married couple. It was inclosed in a little note from Mrs. Germaine to my wife, warning us that we were not to expect to meet a large party. “It is the first dinner we give, on our return from our wedding tour” (the lady wrote); “and you will only be introduced to a few of my husband’s old friends.”

In America, and (as I hear) on the continent of Europe also, when your host invites you to dine at a given hour, you pay him the compliment of arriving punctually at his house. In England alone, the incomprehensible and discourteous custom prevails of keeping the host and the dinner waiting for half an hour or more—without any assignable reason and without any better excuse than the purely formal apology that is implied in the words, “Sorry to be late.”

Arriving at the appointed time at the house of Mr. and Mrs. Germaine, we had every reason to congratulate ourselves on the ignorant punctuality which had brought us into the drawing-room half an hour in advance of the other guests.

In the first place, there was so much heartiness, and so little ceremony, in the welcome accorded to us, that we almost fancied ourselves back in our own country. In the second place, both husband and wife interested us the moment we set eyes on them. The lady, especially, although she was not, strictly speaking, a beautiful woman, quite fascinated us. There was an artless charm in her face and manner, a simple grace in all her movements, a low, delicious melody in her voice, which we Americans felt to be simply irresistible. And then, it was so plain (and so pleasant) to see that here at least was a happy marriage! Here were two people who had all their dearest hopes, wishes, and sympathies in common—who looked, if I may risk the expression, born to be man and wife. By the time when the fashionable delay of the half hour had expired, we were talking together as familiarly and as confidentially as if we had been all four of us old friends.

Eight o’clock struck, and the first of the English guests appeared.

Having forgotten this gentleman’s name, I must beg leave to distinguish him by means of a letter of the alphabet. Let me call him Mr. A. When he entered the room alone, our host and hostess both started, and both looked surprised. Apparently they expected him to be accompanied by some other person. Mr. Germaine put a curious question to his friend.

“Where is your wife?” he asked.

Mr. A answered for the absent lady by a neat little apology, expressed in these words:

“She has got a bad cold. She is very sorry. She begs me to make her excuses.”

He had just time to deliver his message, before another unaccompanied gentleman appeared. Reverting to the letters of the alphabet, let me call him Mr. B. Once more, I noticed that our host and hostess started when they saw him enter the room alone. And, rather to my surprise, I heard Mr. Germaine put his curious question again to the new guest:

“Where is your wife?”

“I am very sorry. Mrs. B has got a bad headache. She is subject to bad headaches. She begs me to make her excuses.”

Mr. and Mrs. Germaine glanced at one another. The husband’s face plainly expressed the suspicion which this second apology had roused in his mind. The wife was steady and calm. An interval passed—a silent interval. Mr. A and Mr. B retired together guiltily into a corner. My wife and I looked at the pictures.

Mrs. Germaine was the first to relieve us from our own intolerable silence. Two more guests, it appeared, were still wanting to complete the party. “Shall we have dinner at once, George?” she said to her husband. “Or shall we wait for Mr. and Mrs. C?”

“We will wait five minutes,” he answered, shortly—with his eye on Mr. A and Mr. B, guiltily secluded in their corner.

The drawing-room door opened. We all knew that a third married lady was expected; we all looked toward the door in unutterable anticipation. Our unexpressed hopes rested silently on the possible appearance of Mrs. C. Would that admirable, but unknown, woman, at once charm and relieve us by her presence? I shudder as I write it. Mr. C walked into the room—and walked in, alone.

Mr. C was an elderly man; Mr. C had lived (judging by appearances) in the days when the old-fashioned laws of politeness were still in force. He discovered his two married brethren in their corner, unaccompanied by their wives; and he delivered his apology for his wife with the air of a man who felt unaffectedly ashamed of it:

“Mrs. C is so sorry. She has got such a bad cold. She does so regret not being able to accompany me.”

At this third apology, Mr. Germaine’s indignation forced its way outward into expression in words.

“Two bad colds and one bad headache,” he said, with ironical politeness. “I don’t know how your wives agree, gentlemen, when they are well. But when they are ill, their unanimity is wonderful!”

The dinner was announced as that sharp saying passed his lips.

I had the honor of taking Mrs. Germaine to the dining-room. Her sense of the implied insult offered to her by the wives of her husband’s friends only showed itself in a trembling, a very slight trembling, of the hand that rested on my arm. My interest in her increased tenfold. Only a woman who had been accustomed to suffer, who had been broken and disciplined to self-restraint, could have endured the moral martyrdom inflicted on her as this woman endured it, from the beginning of the evening to the end.

Am I using the language of exaggeration when I write of my hostess in these terms? Look at the circumstances as they struck two strangers like my wife and myself.

Here was the first dinner party which Mr. and Mrs. Germaine had given since their marriage. Three of Mr. Germaine’s friends, all married men, had been invited with their wives to meet Mr. Germaine’s wife, and had (evidently) accepted the invitation without reserve. What discoveries had taken place between the giving of the invitation and the giving of the dinner it was impossible to say. The one thing plainly discernible was, that in the interval the three wives had agreed in the resolution to leave their husbands to represent them at Mrs. Germaine’s table; and, more amazing still, the husbands had so far approved of the grossly discourteous conduct of the wives as to consent to make the most insultingly trivial excuses for their absence. Could any crueler slur than this have been cast on a woman at the outs et of her married life, before the face of her husband, and in the presence of two strangers from another country? Is “martyrdom” too big a word to use in describing what a sensitive person must have suffered, subjected to such treatment as this? Well, I think not.

We took our places at the dinner-table. Don’t ask me to describe that most miserable of mortal meetings, that weariest and dreariest of human festivals! It is quite bad enough to remember that evening—it is indeed.

My wife and I did our best to keep the conversation moving as easily and as harmlessly as might be. I may say that we really worked hard. Nevertheless, our success was not very encouraging. Try as we might to overlook them, there were the three empty places of the three absent women, speaking in their own dismal language for themselves. Try as we might to resist it, we all felt the one sad conclusion which those empty places persisted in forcing on our minds. It was surely too plain that some terrible report, affecting the character of the unhappy woman at the head of the table, had unexpectedly come to light, and had at one blow destroyed her position in the estimation of her husband’s friends. In the face of the excuses in the drawing-room, in the face of the empty places at the dinner-table, what could the friendliest guests do, to any good purpose, to help the husband and wife in their sore and sudden need? They could say good-night at the earliest possible opportunity, and mercifully leave the married pair to themselves.

Let it at least be recorded to the credit of the three gentlemen, designated in these pages as A, B, and C, that they were sufficiently ashamed of themselves and their wives to be the first members of the dinner party who left the house. In a few minutes more we rose to follow their example. Mrs. Germaine earnestly requested that we would delay our departure.

“Wait a few minutes,” she whispered, with a glance at her husband. “I have something to say to you before you go.”

She left us, and, taking Mr. Germaine by the arm, led him away to the opposite side of the room. The two held a little colloquy together in low voices. The husband closed the consultation by lifting the wife’s hand to his lips.