The Heart of Princess Osra

No character in recent fiction has excited greater interest than the beautiful, wilful, cruel, tender-hearted, proud, witty, and wholly delightful Princess Osra. Anthony Hope is at his best in the stories of which she is the heroine.’The Heart of Princess Osra is full of throbs and incidents, and though there are not less than nine of the lady’s passages d’amour, and ‘le pays du tendre’ is criss-crossed in all directions, you still want a baker’s dozen of these stories. 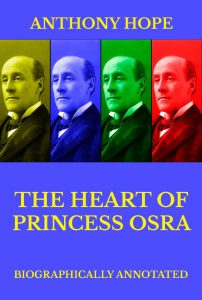 The Heart of Princess Osra

The Heart of Princess Osra.