For this story there can be nothing but praise. It is true that it can scarcely be called literature, as doubtless no one knows better than the author. A writer who leaves off such work as Half a Hero and takes a royal road to fortune, if not to fame, with The Prisoner of Zenda, must be conscious of the change of method. But the work is quite as fine in its different way as if it were of much finer literary quality, and far more interesting than many a better written story. Too many books are worn thin by overuse of literature’s tools, too few are endowed with the vitality that makes this tale vividly alive. From beginning to end it moves with a breathless rush. The plot is the purchase by an English nobleman ot an isolated island inhabited by semi-civilised Greeks who have a confirmed habit of killing any man who buys the island. They kill the old lord who sells it, and who dies just as the new owner arrives, so that the story opens with murder, to be followed by attempted assassination, all leading to blood and adventures galore. 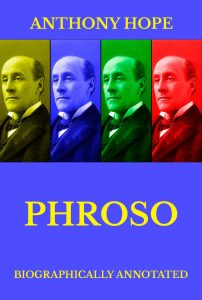