“The Lost World” is an amazing account of an adventurous expedition into the unexplored wilds of South America in search of a strange species of prehistoric animal which was discovered alive by an English scientist whose weird tale of his experiences and whose specimens and photographs were supposed by his confreres to have been forged by a maniac. The story is told in the first person by a young journalist, who accompanied the explorers sent out to the Amazon to verify the professor’s report. That love rather than science is the object of the narrator’s adventure is of little account, for once the reader has entered this “Lost World,” he becomes a part of it with everything else shut out and forgotten. Of all weird and fanciful tales — of all imaginative romances — this reaches the climax, and it is written with such gripping vividness, such seemingly scientific accuracy that the reader is almost convinced in spite of himself that the strange adventures of the crazy professor and his associates are real, and that somewhere there is a lost world full of giants and prehistoric animals. 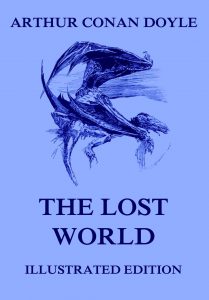 Edward Malone, a reporter for the Daily Gazette, asks his news editor, McArdle, for a dangerous and adventurous mission in order to impress the woman he loves, Gladys Hungerton. He is sent to interview the cantankerous Professor Challenger, who has become notorious for claims made about his recent expedition to South America. The professor has been plagued by intrusive reporters and, being a formidable man of great strength, has taken to forcibly ejecting them, despite the resulting police prosecutions. To gain entry Malone pretends to be an honest enquirer, but is quickly discovered, assaulted and thrown into the street. Although this is witnessed by a policeman, Malone does not press charges as the original deceit was his. Challenger is suitably impressed, and decides to reveal something of his discovery of living dinosaurs in South America. Malone is invited to a scientific gathering that evening at which he volunteers, along with the biologist Professor Summerlee and the Amazon adventurer Lord John Roxton, to travel to South America to investigate the claims.

After a long and arduous journey through Brazil and its rainforest, the explorers reach a volcanic plateau jutting far above the jungle. Upon climbing up to the plateau, one of their local guides who has a score to settle with Roxton destroys their temporary bridge across a precipice, trapping the explorers on the dinosaurs’ plateau. The explorers encounter five iguanodons and are later attacked by pterodactyls, and Roxton finds some blue clay in which he takes a great interest. After numerous encounters with dinosaurs, Challenger, Summerlee, and Roxton are captured by a race of ‘ape-men’. While in the ape-men’s village, they discover a tribe of anatomically-modern humans (calling themselves Accala) inhabiting the other side of the plateau, with whom the ape-men (called Doda by the Accala) are at war. With the help of the expedition’s firepower, the Accala conquer the ape-men; and insist that the expedition remain on the plateau. With the help from the young prince of the Accala, whom they had saved from the ape-men, the expedition discover a tunnel to the outside world, where they join a large rescue party. Upon return to England, they present their report, which include pictures and a newspaper report by Malone, but they are disbelieved by the public until Challenger shows as proof a live pterodactyl, which then escapes into the Atlantic Ocean. At dinner, Roxton reveals that the blue clay contains diamonds, about £200,000 worth, to be split between them. Challenger plans to open a private museum, Summerlee plans to retire and categorize fossils, and Roxton plans to return to the lost world. Malone returns to his love, Gladys, only to find that she had married a solicitor’s clerk in his absence. He therefore volunteers to join Roxton’s voyage.