In the course of its serene spinning on through space the earth runs into a belt or stratum of poisonous vapor, which is deadly to every living thing on earth. The only warning given is an inexplicable blurring of Frauenhofer’s lines in the spectroscope, and Professor Challenger, the hairy, ﬁery-tempered scientist, is the only man keen enough to foresee what is coming. Behold then, the nations of the earth, one by one on a bright summer day, succumbing, suddenly insensible, to the poison vapor. Every animal thing suffers alike; birds fall dead from the branches; horses drop as they stand in their shafts; men drop at their work or play. Engineers falling at their posts, leave their trains full of unconscious humanity to rush on to destruction. Fires break out in a thousand cities and the human race, and indeed all animal life on the earth, comes apparently to a terrible end. The only exception is a little party who under Challenger‘s guidance seal themselves in a room in his country house with a supply of cylinders of oxygen … 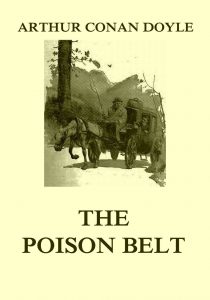 Challenger sends telegrams asking his three companions from The Lost World — Edward Malone, Lord John Roxton, and Professor Summerlee – to join him at his home outside London, and instructs each of them to ‘bring oxygen’. On arrival they are ushered into a sealed room, along with Challenger and his wife. In the course of his researches into various phenomena, Challenger has predicted that the Earth is moving into a belt of poisonous ether which, based on its effect on the people of Sumatra earlier in the day, he expects to stifle humanity. Challenger seals them in the room with cylinders of oxygen, which he (correctly) believes will counter the effect of the ether.

The five wait out the Earth’s passage through the poison belt as they watch the world outside die and machines run amok. (According to Victorian values – or to Doyle’s understanding of them – Challenger’s servants are left outside the sealed room, and they continue to perform their duties until the ether overtakes them.) Finally, the last of the oxygen cylinders is emptied, and they open a window, ready to face death. To their surprise, they do not die, and conclude the Earth has now passed through the poison belt. They journey through the dead countryside in Challenger’s car, finally arriving in London. They encounter only one survivor, an elderly, bed-ridden woman prescribed oxygen for her health.

After returning to Challenger’s house, they discover that the effect of the ether is temporary, and the world reawakens with no knowledge that they have lost any time at all. Eventually Challenger and his companions manage to convince the world what happened – a task made easier by the tremendous amount of death and destruction caused by runaway machines and fires that took place while the world was asleep – and humanity is shocked into placing a higher value on life.