The Valley of Fear

In an old English house is a murder mystery which seems insoluble. The scenes suddenly change to America and the murder syndicate of an anarchistic community. Here broods the shadow of horrible fear, but it is dissipated by the investigations and dramatic coup of a man who is a strange and interesting character. .. Thousands of people from all over the world have for years been writing to Conan Doyle, begging for another story about Sherlock Holmes, the most popular fiction hero of the century. At last he has complied. For many months he worked on this story, to make it worthy of the great detective, his hero. Here it is— A full-length Sherlock Holmes novel. Exciting as “The Sign of the Four.” Strange as “The Hound of the Baskervilles.” Humanly charming as “The Adventures of Sherlock Holmes.” 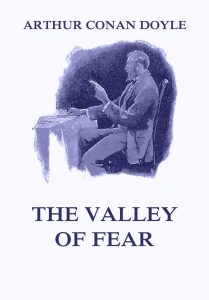 The Valley of Fear

The Valley of Fear.

The novel starts with Sherlock Holmes receiving a cipher message from Fred Porlock (pseudonym), an agent of Professor Moriarty. After Porlock sends the message, however, he changes his mind for fear of Moriarty’s discovering that he is a traitor. He decides not to send the key to the cipher, but he sends Holmes a note telling of this decision. From the cipher message and the second note, Holmes is able to deduce that it is a book-cipher and that the book used for the encryption is a common book, large (with at least 534 pages), printed in two columns per page, and standardized. An almanac fits these conditions exactly. Holmes tries the latest edition of Whitaker’s Almanac, which he had only received a few days earlier, and fails; he then tries the previous edition. With this almanac, Holmes is able to successfully decipher the message as a warning that “some devilry is intended against one Douglas”, a country gentleman residing at Birlstone House.

Some minutes later, Inspector Macdonald arrives at Baker Street with news that a Mr. John Douglas of Birlstone Manor House, Birlstone, Sussex, has been murdered. Holmes tells MacDonald of Porlock’s warning, suggesting Moriarty’s involvement. However, MacDonald doesn’t fully believe that the educated and well-respected Moriarty is a criminal. Holmes, Watson, and MacDonald travel to Birlstone House, an ancient moated manor house, to investigate the crime.

Douglas had been murdered the evening before. Cecil Barker, a frequent guest at Birlstone House, had been in his room at half-past eleven when he heard the report of a gun, according to his testimony. He had rushed down to find Douglas lying in the center of the room nearest the front door of the house; a sawed-off shotgun lay across the murdered man’s chest. He had been shot at close range, receiving the full charge of the shotgun in the face. His head was blown ‘almost to pieces’. Barker had rushed to the village police station and notified Sergeant Wilson, who was in charge of the station. Wilson followed Barker to the house after notifying the county authorities.

The sergeant had begun investigating immediately. Barker drew his attention the open window, and to a smudge of blood like the mark of a boot-sole upon the window sill. The drawbridge over the moat had been raised at 6:00 pm. Barker speculated that the murderer had entered by the drawbridge before that time, hid in the room, and left by the window directly after killing Douglas. The moat was only a few feet deep, and could be easily crossed.

Sergeant Wilson found a card beside the corpse with the initials “V.V.” and the number 341 beneath them. Muddy boot-prints were found behind the curtains, bearing out Barker’s theory. On the murdered man’s forearm was a curious design, a triangle within a circle; it was not a tattoo, but a brand. This mark had been noticed many times before upon John Douglas’s forearm. Douglas’ wedding ring appeared to have been taken from his hand. The chief Sussex detective, White Mason, had arrived at Birlstone House by 3:00 in the morning. By 5:45, he had sent for Scotland Yard. Inspector Alec MacDonald took the case, and notified Holmes because he thought Holmes would be interested. By noon, MacDonald, Holmes and Watson meet White Mason in Birlstone.

Holmes, MacDonald, and White Mason go to the scene of the murder. They discuss the case, agreeing that suicide is out of the question, and that someone from outside the house committed the murder. Barker says that he believes a secret society of men pursued Douglas, and that Douglas retreated to rural England out of fear for his life. Mr. Douglas married after arriving in England five years earlier. His first wife had died of typhoid. Douglas met and worked with Cecil Barker in America, before departing for Europe. Some episode of Douglas’s life in America caused the fear for his life, and Mrs. Douglas said her husband mention something called “The Valley of Fear”.

By studying Cecil Barker’s slippers, Holmes determines Barker’s shoe made the mark on the window, to give the appearance that someone exited that way. In their lodgings, Holmes tells Watson that Cecil Barker and Mrs. Douglas are certainly lying: the events as they tell them would be impossible. Moreover, Holmes learns that the housekeeper heard a door slamming half an hour before the alarm; Holmes believes that this sound was the fatal shot. White Mason, the Sussex detective, and MacDonald track a bicycle found on the grounds of the house to an American staying at a guest house. The American appears to be the murderer, but there is no sign of the man.

Holmes ask MacDonald to write to Cecil Barker, telling him that the police intend to search the moat the next day. That night Holmes, Watson, MacDonald and White Mason lay in wait outside Birlstone Manor and see Cecil Barker fish something out of the moat. The four men rush Cecil and discover the bundle from the moat contain the clothes of the missing American connected with the bicycle. Barker refuses to explain the situation. At that moment, Mr. Douglas appears, alive and well. He hands Watson a written account called “The Valley of Fear”, which explains why he feared for his life.

Douglas explains that he had spotted an enemy of his, Ted Baldwin, in the area and expected an attack. When Baldwin attempted to shoot Douglas in his study, Douglas grabbed the gun and shot Baldwin in the face. With Cecil’s help, Douglas dressed the man in his own clothes, except for his wedding ring, to deceive the secret society which he and Baldwin had belonged to, since both arms bore the society’s mark. Cecil and Mrs. Douglas had covered for Douglas who had been hiding in the house. In an interview with Watson, Douglas explains that his real name was Birdy Edwards and he had been a Pinkerton detective in Chicago. Edwards had infiltrated a dangerous gang in Vermissa Valley (a.k.a. the Valley of Fear) and brought them to justice. Afterwards, the criminals attempted to kill him, after being released from jail.

Hounded, Douglas had run to England, where he met and married his second wife. Holmes urges Douglas to leave England and warns that a new threat now hangs over him. Douglas takes this advice, but shortly after Holmes learns that Douglas was lost overboard on the vessel to Africa. Holmes believes Moriarty was responsible for ending Douglas’ life. Holmes wants to bring Moriarty down, but warns Watson and Barker that it will take some time to achieve.