The Memoirs of Sherlock Holmes

Pretty well everybody reads Mr. Conan Doyle; and none of those who agree in the general verdict that the “The Adventures of Sherlock Holmes” are unsurpassed of late years as stories of detective ingenuity will wait for a recommendation to read the final ” Memoirs” of the same suprasubtle unraveller of mysteries. The story of the last exploit of the hero of a “Study in Scarlet,” ending with his apotheosis at the Falls of Reichenbach, brings his memoirs to a close in a sufficiently striking manner, though not, it must be confessed, without an extra allowance of the bizarre and the improbable. It was fitting that, if Mr. Holmes was to die a violent death at the hands of an enemy, this enemy should be a thaumaturgist like himself, only not benevolent, and not quite so clever. In other words, he had to be an impossible monstrosity, and that is what Mr. Conan Doyle has drawn, with a good deal of plausible versimilitude. It is only fair to add that the “Memoirs” are as attractive and as appetizing as the “Adventures.” 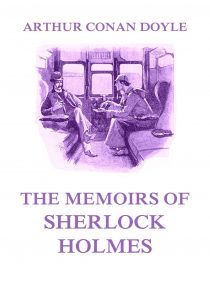 The Memoirs of Sherlock Holmes

The Memoirs of Sherlock Holmes.

The history of the book (from Wikipedia):

The twelve stories (eleven in American editions) of the Memoirs are:

The first London edition of the Memoirs in 1894 did not include “The Adventure of the Cardboard Box”, although all twelve stories had appeared in the Strand Magazine. The first U.S. edition included the story, but it was very quickly replaced with a revised edition that omitted it.

The reasoning behind the suppression is unclear. In Britain the story was apparently removed at Doyle’s request as it included adultery and so was unsuitable for younger readers. This may have also been the cause for the rapid removal of the story from the U.S. edition, and some sources[specify] state that the publishers believed the story was too scandalous for the American public.

As a result, this story was not republished in the U.S. until many years later, when it was added to His Last Bow. Even today, most American editions of the canon include it with His Last Bow, while most British editions keep the story in its original place in The Memoirs of Sherlock Holmes.

Doyle had decided that these would be the last collection of Holmes’s stories and initially decided to get him killed in “The Final Problem”. However public pressure forced him to write the character again in “The Hound of Baskervilles” and resurrect him in the forthcoming “The Return of Sherlock Holmes”.