The Mysteries of Freemasonry

The Mysteries of Freemasonry – William Morgan

Containing all the degrees of the Order conferred in a Master’s Lodge, as written by Captain William Morgan. All the degrees conferred in the Royal Arch, Chapter, and Grand Encampment of Knights Tcmplars, Knights of the Red Cross, of the Christian Mark, and of the Holy Sepulchre. Also, the eleven ineffable degrees conferred in the Lodge of Perfection; and the still higher degrees of Prince of Jerusalem, Knights of the East and West, Venerable Grand Masters of Symbolic Lodges, Knights and Adepts of the Eagle or Sun, Princes of the Royal Secret, Sovereign Inspector-General, etc. Revised and corrected to correspond with the most approved forms and ceremonies in the various Lodges of Freemasons throughout the United States. 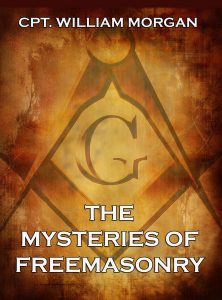 The Mysteries of Freemasonry

The Mysteries of Freemasonry.