The Song of the Cardinal

The Song of the Cardinal – Gene Stratton-Porter

“The Song of the Cardinal” is a fascinating story of the life of a redbird, or Kentucky cardinal, as it is popularly called, who is born in the valley of the Wabash. The author possesses the soul of an artist and a poet, which enables her to invest the story with the charm of a rich and vivid imagination; while her knowledge of the habits and peculiarities of the redbird and the love she feels for the cardinal family impart a living interest to her work that makes the reader enter into the joys and tribulations, the triumphs, failures, and final victory of the hero, with much the same personal interest one feels in the leading figures of a well-told romance of life. Into the web and woof of the story the author has also woven a beautiful picture of an old man and woman who through the song and the presence of the cardinal are brought again into the loving, sympathetic nearness to each other that marked the golden days of their early married life. 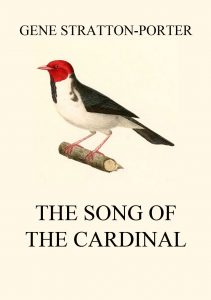 The Song of the Cardinal

The Song of the Cardinal.