The Napoleon of Notting Hill

Mad, perfectly mad, madder than the immortal tea-party of Alice, is the thought while reading this novel, or satire, or caricature, or allegory, or farce, or joke, or whatever it is, which Mr. Chesterton has published. When you have finished reading the book, you lay it down and positively gasp, your brain whirls and you stagger with the question whether you have been reading a book, or dreaming a dream. You feel of the book, find it there — very substantial, and then you wonder whether you or the writer is mad: it must be one or the other. Then you remember that Mr. Chesterton is a perfectly sane man, a writer of great ability and much distinction. Then you also remember that Lewis Carroll was a mathematician, and you realize that no madman can write entertaining madness, and you come to the conclusion that it is you who lack the key. Then you think it all over; and you not only do not find the key, but you do not even find the keyhole. You ask someone else about it; he says no one has found the key, — not the best searchers. You finally decide that there is no key, and no keyhole, that the whole tiling is just a nebulous mass of gas — laughing-gas, to be taken as an antidote for the pain of modern life and the dullness of fiction. A humorous and satirical tale of English politics. While an intimate knowledge of the ins and outs of the British policies and shibboleths of the day is required to appreciate all the author’s points, yet the story will interest those who love the odd and unusual. 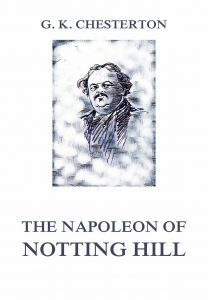 The Napoleon of Notting Hill

The Napoleon of Notting Hill.