In this volume Mr. Chesterton reprints nearly twenty of the ingenious and brilliant papers which have delighted and puzzled the readers of the London Daily News and Speaker. The subjects are all biographical, ranging from Alfred the Great to Bret Harte, but those who have already learnt to admire Mr. Chesterton’s paradoxes will not need to be assured that his method of treatment is not that of Mr. Sidney Lee’s Dictionary. 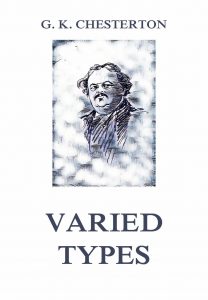