Ulysses S. Grant was the 18th President of the United States and the Union general who was imperative for the North’s victory in the Civil War. His autobiography has long become legendary and can be found here in a complete edition. In 70 detailed chapters Grant tells the story of his life from his birth and boyhood to his graduation at West Point, the Mexican War, the outbreak of the rebellion and his merits in the the civil war to the day of the march to Washington D.C. 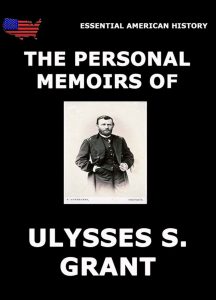 Ulysses S. Grant (born Hiram Ulysses Grant; April 27, 1822 – July 23, 1885) was the 18th President of the United States (1869–77). As Commanding General (1864–69), Grant worked closely with President Abraham Lincoln to lead the Union Army to victory over the Confederacy in the American Civil War. Supported by Congress, Grant implemented Reconstruction, often at odds with President Andrew Johnson. Twice elected president, Grant led the Republicans in their effort to remove the vestiges of Confederate nationalism and slavery, protect African-American citizenship, and support economic prosperity. His presidency has often been criticized for tolerating corruption and for the economic depression in his second term.

Grant graduated in 1843 from the United States Military Academy at West Point, then served in the Mexican–American War. After the war he married Julia Boggs Dent in 1848, their marriage producing four children. Grant initially retired from the Army in 1854. He struggled financially in civilian life. When the Civil War began in 1861, he rejoined the U.S. Army. In 1862, Grant took control of Kentucky and most of Tennessee, and led Union forces to victory in the Battle of Shiloh, earning a reputation as an aggressive commander. In July 1863, after a series of coordinated battles, Grant defeated Confederate armies and seized Vicksburg, giving the Union control of the Mississippi River and dividing the Confederacy in two. After his victories in the Chattanooga Campaign, Lincoln promoted him to lieutenant general and Commanding General of the Army in March 1864. Grant confronted Robert E. Lee in a series of bloody battles, trapping Lee’s army in their defense of Richmond. Grant coordinated a series of devastating campaigns in other theaters, as well. In April 1865, Lee surrendered to Grant at Appomattox, effectively ending the war. Historians have hailed Grant’s military genius, and his strategies are featured in military history textbooks, but a minority contend that he won by brute force rather than superior strategy.

After the Civil War, Grant led the army’s supervision of Reconstruction in the former Confederate states. Elected president in 1868, he stabilized the nation during that turbulent period, prosecuted the Ku Klux Klan, and enforced civil rights and voting rights laws using the army and the newly created Department of Justice. He also used the army to build the Republican Party in the South. After the disenfranchisement of some former Confederates, Republicans gained majorities, and African Americans were elected to Congress and high state offices. The Democrats and Liberal Republicans united behind Grant’s opponent in the presidential election of 1872, but were unable to defeat his reelection. In his second term, the Republican coalitions in the South splintered and were defeated one by one, as a faction of white Southern “Redeemers” regained control of Southern state governments using violence, voter fraud, and racist appeal. In response, Grant signed the Civil Rights Act of 1875 into law. In May 1875, Grant authorized his Secretary of Treasury Benjamin Bristow to prosecute the corrupt Whiskey Ring. Grant’s Indian Peace Policy, incorporating Christian missionaries, initially reduced frontier violence, but failed after the Black Hills Gold Rush was followed by the Great Sioux War of 1876. Grant responded to charges of administration corruption more than any 19th Century president. He appointed the first Civil Service Commission and signed legislation ending the corrupt moiety system.

In foreign policy, Grant was uneven, having sought to increase trade and influence while remaining at peace with the world. When Grant relied on his Secretary of State Hamilton Fish, his administration successfully resolved the Alabama claims by the Treaty of Washington with Great Britain, ending wartime tensions. Additionally, Grant and Fish avoided war with Spain over the Virginius Affair negotiating a peaceful resolution. Congress rejected Grant’s own attempted annexation of the Dominican Republic initiative, creating a rift among Republicans. His administration implemented a gold standard and sought to strengthen the dollar. Corruption charges escalated during his second term, while his response to the Panic of 1873 proved ineffective nationally in halting the five-year industrial depression that produced high unemployment, low prices, low profits, and bankruptcies. Grant left office in 1877 and embarked on a two-year diplomatic world tour that captured the nation’s attention.

In 1880, Grant was unsuccessful in obtaining the Republican presidential nomination for a third term. Facing severe investment reversals and dying of throat cancer, he wrote his memoirs, which proved to be a major literary work and financial success. His death in 1885 prompted an outpouring in support of national unity. Historical assessment of Grant’s legacy has varied considerably over the years. Early historical evaluations were negative about Grant’s presidency, often focusing on the corruption charges against his associates. This trend began to change in the later 20th century. Scholars in general rank his presidency below the average, but modern research, in part focusing on civil rights, evaluates his administration more positively.