The Sacred Magic Of Abramelin The Mage

This remarkable grimoire was translated by S.L.M. Mathers from a 15th century French mauscript. This text has had a huge influence on modern ceremonial magic, and has been cited as a primary influence on Aleister Crowley. Abraham of Würzburg, a cabalist and scholar of magic, describes a quest for the secret teachings which culminated in Egypt, where he encountered the magician Abramelin, who taught him his system in detail. The procedure involves many months of purification, followed by the invocation of good and evil spirits to accomplish some very worldly goals, including acquisition of treasure and love, travel through the air and under water, and raising armies out of thin air. It also tells of raising the dead, transforming ones appearance, becoming invisible, and starting storms. The key to this is a set of remarkable magic squares, sigils consisting of mystical words which in most cases can be read in several directions. Of course, these diagrams are said to have no potency unless used in the appropriate ritual context by an initiate. Mathers analyzed these words in an extensive set of notes and gives possible derivations from Hebrew, Greek and other languages. 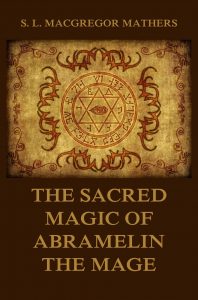 The Sacred Magic Of Abramelin The Mage

The Sacred Magic Of Abramelin The Mage.

About the origin of of this grimoire (from wikipedia.com)

The first printed version, also in German, dates to 1725 and was printed in Cologne by Peter Hammer. A partial copy in Hebrew is found in the Bodleian Library in Oxford, and dates from around 1740. A manuscript copy existed in French in the Bibliothèque de l’Arsenal in Paris, an institution founded in 1797. The French copy has since disappeared, but is available on microfilm. Another 17th-century manuscript in Italian exists in the ‘Legato Martinengo’ of the Queriniana Library in Brescia, Italy. It was part of the collection of the Count and Qabbalist Leopardo Martinengo of Barco and Pallavicina. The manuscript, unknown for centuries to international researchers until 2009, has been found by academic researcher Maria Elena Loda in the esoteric section. At the moment, it is the only known manuscript translation in Italian language of the Abramelin grimoire.

All German copies of the text consist of four books: an autobiographical account of the travels of Abraham of Worms to Egypt, a book of assorted materials from the corpus of the practical Kabbalah (including some which is duplicated in the German-Jewish grimoire called “The Sixth and 7th Books of Moses”) and the two books of magic given by Abramelin to Abraham. The well-known English translation by S.L. MacGregor Mathers from the French Manuscript in Paris contains only three of the four books. The Hebrew version in Oxford is limited to Book One, without reference to the further books.

Of all the extant sources, the German manuscripts in Wolfenbüttel and Dresden are taken by scholars to be the authoritative texts. According to respected Kabbalah scholar Gershom Scholem, the Hebrew version in Oxford was translated into Hebrew from German. An analysis of the spelling and language usage in the French manuscript indicates that it dates to the 18th century, and that it was also likely copied from a German original. Although the author quotes from the Jewish Book of Psalms, the version given is not from the Hebrew; rather, it is from the Latin Vulgate, a translation of the Bible employed by Roman Catholics at that time.