Dickens’s tenth novel, was published in 1861, nine years before his death. As in “David Copperfield,” the hero tells his own story from boyhood. Yet in several essential points “Great Expectations” is markedly different from “David Copperfield,” and from Dickens’s other novels. Owing to the simplicity of the plot, and to the small number of characters, it possesses greater unity of design. These characters, each drawn with marvelous distinctness of outline, are subordinated throughout to the central personage “Pip,” whose great expectations form the pivot of the narrative. But the element that most clearly distinguishes this novel from the others is the subtle study of the development of character through the influence of environment and circumstance. In the career of Pip, a more careful and natural presentation of personality is made than is usual with Dickens. He is a village boy who longs to be a “gentleman.” His dreams of wealth and opportunity suddenly come true. He is supplied with money, and sent to London to be educated and to prepare for his new station in life. Later he discovers that his unknown benefactor is a convict to whom he had once rendered a service. The convict, returning against the law to England, is recaptured and dies in prison, his fortune being forfeited to the Crown. Pip’s great expectations vanish into thin air. “Great Expectations” is a delightful novel, rich in humor and free from false pathos. The character of Joe Gargery, simple, tender, quaintly humorous, would alone give imperishable value to the book. 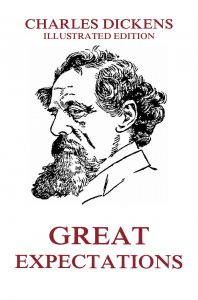 On Christmas Eve, around 1812, Pip, an orphan who is about seven years old, encounters an escaped convict in the village churchyard, while visiting the graves of his parents and siblings. Pip now lives with his abusive elder sister and her kind husband Joe Gargery, a blacksmith. The convict scares Pip into stealing food and a file. Early on Christmas morning Pip returns with the file, a pie and brandy. During Christmas dinner, at the moment Pip’s theft is about to be discovered, soldiers arrive and ask Joe to repair some shackles. Joe and Pip accompany them as they recapture the convict who is fighting with another escaped convict. The first convict confesses to stealing food from the smithy.

Joe accompanies Pip for the last visit, when she gives the money for Pip to be bound as apprentice blacksmith. Joe’s surly assistant, Dolge Orlick, is envious of Pip and dislikes Mrs Joe. When Pip and Joe are away from the house, Mrs Joe is brutally attacked, leaving her unable to speak or do her work. Orlick is suspected of the attack. Mrs Joe becomes kind-hearted after the attack. Biddy arrives to help with her care.

Four years into Pip’s apprenticeship, Mr Jaggers, a lawyer, tells him that he has been provided with money, from an anonymous benefactor, so that he can become a gentleman. Pip is to leave for London, but presuming that Miss Havisham is his benefactor, he first visits her.

Pip sets up house in London at Barnard’s Inn with Herbert Pocket, the son of his tutor, Matthew Pocket, who is a cousin of Miss Havisham. Herbert and Pip have previously met at Satis Hall, where Herbert was rejected as a playmate for Estella. He tells Pip how Miss Havisham was jilted by her fiancé. Pip meets fellow pupils, Bentley Drummle, a brute of a man from a wealthy noble family, and Startop, who is agreeable. Jaggers disburses the money Pip needs.

When Joe visits Pip at Barnard’s Inn, Pip is ashamed of him. Joe relays a message from Miss Havisham that Estella will be at Satis House for a visit. Pip returns there to meet Estella and is encouraged by Miss Havisham, but he avoids visiting Joe. He is disquieted to see Orlick now in service to Miss Havisham. He mentions his misgivings to Jaggers, who promises Orlick’s dismissal. Back in London, Pip and Herbert exchange their romantic secrets-–Pip adores Estella and Herbert is engaged to Clara. Pip meets Estella when she is sent to Richmond to be introduced into society.

Pip and Herbert build up debts. Mrs Joe dies and Pip returns to his village for the funeral. Pip’s income is fixed at £500 per annum when he comes of age at twenty-one. With the help of Jaggers’ clerk, Wemmick, Pip plans to help advance Herbert’s future prospects by anonymously securing him a position with the shipbroker, Clarriker’s. Pip takes Estella to Satis House. She and Miss Havisham quarrel over Estella’s coldness. In London, Bentley Drummle outrages Pip, by proposing a toast to Estella. Later, at an Assembly Ball in Richmond, Pip witnesses Estella meeting Bentley Drummle and warns her about him; she replies that she has no qualms about entrapping him.

A week after he turns 23 years old, Pip learns that his benefactor is the convict he encountered in the churchyard, Abel Magwitch, who had been transported to New South Wales after that escape. He has become wealthy after gaining his freedom there, but cannot return to England. However, he returns to see Pip, who was the motivation for all his success. Pip is shocked, and stops taking money from him. Subsequently Pip and Herbert Pocket devise a plan for Magwitch to escape from England.

Magwitch shares his past history with Pip, and reveals that the escaped convict whom he fought in the churchyard was Compeyson, the fraudster who had deserted Miss Havisham.

Pip returns to Satis Hall to visit Estella and encounters Bentley Drummle, who has also come to see her and now has Orlick as his servant. Pip accuses Miss Havisham of misleading him about his benefactor. She admits to doing so, but says that her plan was to annoy her relatives. Pip declares his love to Estella, who, coldly, tells him that she plans on marrying Drummle. Heartbroken, Pip walks back to London, where Wemmick warns him that Compeyson is seeking him. Pip and Herbert continue preparations for Magwitch’s escape.

At Jaggers’s house for dinner, Wemmick tells Pip how Jaggers acquired his maidservant, Molly, rescuing her from the gallows when she was accused of murder.

Then, full of remorse, Miss Havisham tells Pip how the infant Estella was brought to her by Jaggers and raised by her to be cold-hearted. She knows nothing about Estella’s parentage. She also tells Pip that Estella is now married. She gives Pip money to pay for Herbert Pocket’s position at Clarriker’s, and asks for his forgiveness. As Pip is about to leave, Miss Havisham accidentally sets her dress on fire. Pip saves her, injuring himself in the process. She eventually dies from her injuries, lamenting her manipulation of Estella and Pip. Pip now realises that Estella is the daughter of Molly and Magwitch. When confronted about this, Jaggers discourages Pip from acting on his suspicions.

A few days before Magwitch’s planned escape, Pip is lured by an anonymous letter into a sluice house near his old home, where he is seized by Orlick, who intends to kill him. Orlick confesses to injuring Pip’s sister. As Pip is about to be struck by a hammer, Herbert Pocket and Startop arrive to rescue him. The three of them pick up Magwitch to row him to the steamboat for Hamburg, but they are met by a police boat carrying Compeyson, who has offered to identify Magwitch. Magwitch seizes Compeyson, and they fight in the river. Seriously injured, Magwitch is taken by the police. Compeyson’s body is found later.

Pip is aware that Magwitch’s fortune will go to the crown after his trial. But Herbert, who is preparing to move to Cairo, Egypt, to manage Clarriker’s office there, offers Pip a position there. Pip regularly visits Magwitch in the prison hospital as he awaits trial, and on Magwitch’s deathbed tells him that his daughter Estella is alive. After Herbert’s departure for Cairo, Pip falls ill in his rooms, and faces arrest for debt. However, Joe nurses Pip back to health and pays off his debt. When Pip begins to recover, Joe slips away. Pip then returns to propose to Biddy, only to find that she has married Joe. Pip asks Joe’s forgiveness, promises to repay him and leaves for Cairo. There he shares lodgings with Herbert and Clara, and eventually advances to become third in the company. Only then does Herbert learn that Pip paid for his position in the firm.

After working eleven years in Egypt, Pip returns to England and visits Joe, Biddy and their son, Pip Jr. Then in the ruins of Satis House he meets the widowed Estella, who asks Pip to forgive her, assuring him that misfortune has opened her heart. As Pip takes Estella’s hand and they leave the moonlit ruins, he sees “no shadow of another parting from her.”