“The Pickwick Papers” is the one novel of Dickens that abounds neither in pathetic, grewsome, nor dramatic passages. It is pure fun from beginning to end, with a laugh on every page. It attained immediate success and laid the foundations of Dickens’s fame. The types illustrated are caricatures, but nevertheless they are types: Mr. Pickwick, the genial, unsophisticated founder of the club; and that masterly array of ludicrous individuals drawn from all classes high and low. Although the whole book is exaggerated comedy, there is no other that has furnished more characters universally known, or given to common English speech more current phrases. Many sayings and events are still in the “Pickwickian sense”; Sam Weller and his admirable father are still quoted; Mrs. Leo Hunter is still a feature in social life; Bardell trials occur occasionally; and there are many clubs as wise as Pickwick’s. 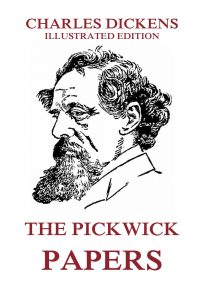 Some background on the Pickwick Papers (from Wikipedia):

Dickens, a young writer, 24 years old, was working as a Parliamentary reporter and a roving journalist; a collection of his “colour” sketches mainly of London life had been published as Sketches by Boz. A firm of London publishers, Messrs. Chapman & Hall, was then projecting a series of “cockney sporting plates” by illustrator Robert Seymour. There was to be a club, the members of which were to be sent on hunting and fishing expeditions into the country. Their guns were to go off by accident; fishhooks were to get caught in their hats and trousers. All these and other misadventures were to be depicted in Seymour’s comic plates.

At this juncture, Charles Dickens was called in to supply the letterpress – that is, the description necessary to explain the plates and connect them into a sort of picture novel such as was then the fashion. Though protesting that he knew nothing of sport, Dickens nevertheless accepted the commission; he consented to the machinery of a club, and in accordance with the original design sketched Mr Winkle who aims at a sparrow only to miss it.

Only in a few instances did Dickens adjust his narrative to plates that had been prepared for him. Typically, he himself led the way with an instalment of his story, and the artist was compelled to illustrate what Dickens had already written. The story thus became the prime source of interest, and the illustrations merely of secondary importance. By this reversal of interest, Dickens transformed, at a stroke, a current type of fiction, consisting mostly of pictures, into a novel of contemporary London life. Simple as the process may appear, others who had tried the plan had all failed. Pierce Egan partially succeeded in his Tom and Jerry, a novel in which the pictures and the letterpress are held in even balance. Dickens won a complete triumph. In future years, however, Dickens was suspiciously eager to distance himself from suggestions that Pierce Egan’s Life in London had been a formative influence.