The pages of this book are replete with the history of those who were participants in the founding of the great city named Atlanta; indeed, it is their record of the stirring events which occurred from year to year from the first settlement, along the formative period of the embryo metropolitan city of today. And largely to the older inhabitant is the reader indebted for this accurate and authentic history, to which they gave much thought and labor. The authors of this work had access to various publications, and have availed themselves of every source of information which could be had. They guide the reader through almost 250 thrilling years of history and share a wealth of information with him. 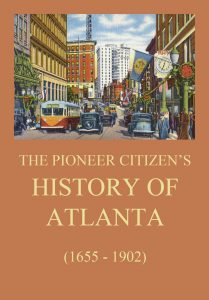 “To rescue from oblivion the memory of former incidents, and to render a just tribute of renown to the many great and wonderful transactions of our progenitors”, is the stimulus to the Pioneer Citizens’ Society, of Atlanta, to produce this work. Like the great father of his country, whose words have just been quoted, we treat of times past, over which the twilight of uncertainty has almost thrown its shadows, and the evening of forgetfulness to descend forever. With something akin to despair we have long beheld the history of this community slipping from our grasp, trembling on the lips of narrative old age, and day by day dropping peace-meal into the tomb. In a little while these -venerable men and women of the days of the past will be gathered to their fathers — indeed, even now there are few left to tell the story. Their children, engrossed by the empty pleasures or insignificant transactions of the present age, will neglect to treasure up the recollections of the past, and posterity will search in vain for memorials of the early settlers. Determined, therefore, to avert, if possible, the threatened disaster, we have gathered up all the fragments of our early history which still exist. Who shall say ’twill be love’s labor lost?

Fortunately for the early history of Atlanta, there have been preserved many facts which light up the pathway and enable the reader to travel the rugged road with the pioneer in the early dawn of this great city. More fortunate still, a few of those who laid Atlanta’s foundations left with us the impressions received in their life-work, upon which the historian could build a story replete with interest to the seeker after knowledge of the days of the past.

The pioneers of Atlanta deserve to be remembered by those who came after them; they laid the foundations deep and broad for this great city; they endured hardships, worked with crude implements — hoped almost against hope — in a land in which the aborigine had recently roamed at will, quite “monarch of all he surveyed,” with no one his title to dispute. Here, in the forests wild, the earliest whites built their log cabins, tilled the soil, reared their families and inaugurated the building of a town which proved the nucleus for a great inland city — the “Gate City of the South.” It has been said of these pioneers that “they did not bring the infirmities of old age, or the weakness of impaired vitality, to linger for a few days in the settlement, and then bequeath their bones to the cemetery; but they came with a long future in front of them, bringing their wives newly married, and their furniture newly bought. They came to grow up with the place, to reap the reward of honest endeavor, and to purchase by dint of patient endeavor a few of the goodly “smiles of fortune.” They left as an inheritance names that enrich the pages of the State’s history — deeds that cause a halo to gather about their memories.

In her infancy Atlanta was like many other border towns; it sheltered some dissolute characters. But, fortunately for her conservative citizenship, they were masterful in intelligence, patriotism, public spirit and in their love for law and order, and possessed the moral courage to risk everything, even their lives, in defense of their convictions. In proof of which may be cited three incidents occurring in those early days, namely: The rebellion against Mayor Norcross, the trial and execution of the murderers of old man Landrum, and the prevention of the execution of William A. Choice by a mob.

There were other stirring incidents in her early life, but none more thrilling, nor exhibiting in a stronger light the true stamina and character of these sturdy pioneers. By and through them the escutcheon of the embryo metropolis was preserved pure and spotless.

Such are the characters portrayed in these pages — such the men whose lives and deeds this book faithfully portrays.

The first white settler in the solitude of the forests in this immediate section was Hardy Ivy. He made his advent in 1833, and built his humble home near where he little thought a great city would someday rise in its splendor, teeming with its thousands of inhabitants and busy marts of trade. Whatever may have been his speculations as to the future, this adventurous spirit could not have dreamed of a city such as Atlanta is today. He came to till the soil and reap the reward of honest labor. As land was of little value at that time, he purchased about two hundred acres on his own terms — agreeing to pay for it in produce “as he could spare it.” His possessions lay in a body running from what is now Decatur street along Peachtree to Cain, and back towards Ponce de Leon, His cabin was in a little clearing about one mile east of Peachtree road.

Far from this lonely habitation were his neighbors — several miles distant indeed. But undismayed, he began clearing up his farm, trusting the future, however precarious seemed the prospects he now encountered. It was not till several years later, however, that this pioneer was joined by others.

The impetus given the settlement can best be understood by the determination on the part of the State of Georgia to build a railroad from the Tennessee river to a point east of the Chattahoochee river in DeKalb county, most suitable for the running of branch roads thence to Madison, Athens, Milledgeville, Forsyth and Columbus. The act was passed by the general assembly in December, 1836. Active operations were not begun till two years later. But the news of this important step spread over the country and attracted attention. The new settlement began to grow slowly.

In 1837, as travel through the settlement began to increase, it became necessary for someone to erect a wayside inn. This was done by Charner Humphries. This inn consisted of a number of shanties huddled together, planked up and painted white — the only painted house in the country — hence it was dubbed the “White Hall.” It was a famous stopping place for travelers and headquarters for the general muster, which took place at stated times, as the law regarding the militia provided.

The writer recently conversed with a gentleman of advanced years, who when a boy traveled through this section with his father. He well remembers it was in 1838 they arrived at the “White Hall” and put up for the night, before proceeding in their buggy to their destination in Alabama.

Let us turn now to a description of the country as it appeared when Ivy came. It was a dense forest of scrubby oaks and pines covering the gravelly hills, while the earth was hid beneath a thick, heavy growth of sourwood, gooseberry and chinquepin shrubbery. The sound of the woodman’s axe had never been heard under the shade of the trees that spread their branches over the hills and gentle slopes beneath them, save that of the traveler when making his camp-fire, or the woodman in pursuit of his game.

There were three public roads running through this woody, unbroken country — the road from Decatur to Newnan, a distance of fifty-five miles, ran through this forest and nearly through what is now the center of the City of Atlanta. At a point near where the Seaboard Air Line depot now stands the road forked, the right-hand running mainly along what is now Decatur and Marietta streets to Montgomery’s ferry on the Chattahoochee river, about half a mile above the railroad bridge. The road to Nelson’s ferry, six or eight miles below Montgomery’s ferry, left that road at a point near where the cotton factory now stands, corner of Marietta and Magnolia streets. Another settlement road ran to the Collier farm on Peachtree creek, and another through what is now Westview cemetery, in the direction of Clark University (colored), in the western part of the city.

The first settlement on the road to Nelson’s ferry was that of Mr. Thurman, who owned a farm and also ran a mill on a small stream that coursed through his place. Among the families of that day living within a radius of about two to ten miles were, Benjamin Little, Charner Humphries, James Montgomery, Abner Conley (whose farm extended down to what is now East Point) and Hornady, Hughie, Blackstock and Moses Trimble.