The Political Aspects of St. Augustine’s City of God

When one civilization has fallen and another is in its birth throes, people are apt to be seduced by the rushlights of a false leadership. The mind and mood of such a time of transition are intensely puzzling and those who would meet its needs must have insight and vision. The Epistle to the Hebrews was written after the fall of Jerusalem in the interest of a larger faith and in defense of the substantial authority of Christianity. When Rome was sacked by Alaric in 410 A. D., the shock of the catastrophe reacted against Christianity. Augustine wrote the De Civitate Dei to prove that the disaster was the inevitable Nemesis of the luxuries and corruptions of the citizenship and had little to do with Christianity, which had only a slight hold on public life. He also pointed out the contrast between the actual city to which the Romans were fanatically devoted, and the ideal city of his prophetic vision, contending that this ideal is eternal and unrealized but in process of realization. He was further convinced that Christianity was not merely a superior gnosis but a scheme of redemption, justified by its higher ethical standards and by the better conduct of its adherents. This apology has all the limitations of the time and the writer, but Augustine was a mystic and a statesman, and the importance of this writing is in the fact that “in it for the first time an ideal consideration, a comprehensive survey of human history found its expression.” 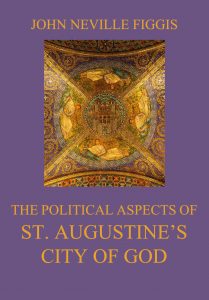 The Political Aspects of St. Augustine’s City of God

The Political Aspects of St. Augustine’s City of God.

Background on the City of God (from wikipedia)

The sack of Rome by the Visigoths in 410 left Romans in a deep state of shock, and many Romans saw it as punishment for abandoning traditional Roman religion for Christianity. In response to these accusations, and in order to console Christians, Augustine wrote The City of God, arguing for the truth of Christianity over competing religions and philosophies and that Christianity was not responsible for the Sack of Rome, but instead was responsible for its success. He attempted to console Christians, writing that even if the earthly rule of the Empire was imperiled, it was the City of God that would ultimately triumph. Augustine’s eyes were fixed on Heaven, a theme of many Christian works of Late Antiquity, and despite Christianity’s designation as the official religion of the Empire, Augustine declared its message to be spiritual rather than political. Christianity, he argued, should be concerned with the mystical, heavenly city, the New Jerusalem, rather than with earthly politics.

The book presents human history as a conflict between what Augustine calls the Earthly City (often colloquially referred to as the City of Man) and the City of God, a conflict that is destined to end in victory for the latter. The City of God is marked by people who forgot earthly pleasure to dedicate themselves to the eternal truths of God, now revealed fully in the Christian faith. The Earthly City, on the other hand, consists of people who have immersed themselves in the cares and pleasures of the present, passing world.

Many Catholics[who?] consider Jacques-Bénigne Bossuet’s Discours sur l’histoire universelle or Speech of Universal History (1681) to be a second edition or continuation of The City of God. This book updates universal history according to Augustine’s thesis of universal war between those humans that follow God and those who follow the Devil.

This concept of world history guided by Divine Providence in a universal war between God and Devil is part of the official doctrine of the Catholic Church as most recently stated in the Second Vatican Council’s Gaudium et Spes document: “The Church … holds that in her most benign Lord and Master can be found the key, the focal point and the goal of man, as well as of all human history … all of human life, whether individual or collective, shows itself to be a dramatic struggle between good and evil, between light and darkness … The Lord is the goal of human history the focal point of the longings of history and of civilization, the center of the human race, the joy of every heart and the answer to all its yearnings.”