The so-called Hermetic writings have been known to Christian writers for many centuries. The early church Fathers (Justin Martyr, Tertullian, Clement of Alexandria) quote them in defense of Christianity. Stobaeus collected fragments of them. The Humanists knew and valued them. They were studied in the sixteenth and seventeenth centuries, and in modern times have again been diligently examined by many scholars. 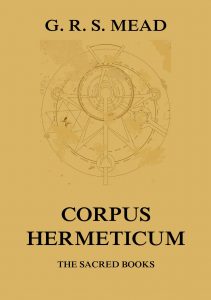 Biography of G.R.S. Mead (from wikipedia)

Mead was born in Peckham, Surrey, England to British Army Colonel Robert Mead and his wife Mary (née Stow), who had received a traditional education at Rochester Cathedral School.

Mead, a highly intuitive and insightful scholar, whose literary activities fall into the latter part of the 19th century and the early part of the 20th century must be regarded as a pioneer of the first order in the field of Gnostic and Hermetic studies. As the late poet and esoteric student Kenneth Rexroth accurately stated In his introduction to the late 1950s University Books edition of Mead’s Fragments of a Faith Forgotten, the only reason for Mead’s continued neglect on the part of many academicians is the fact that he was a Theosophist. When in 1887 the redoubtable Madame Blavatsky settled in London, the young Mead joined the company of her close associates. In her circle he learned of the profound mysteries of the Gnostics and of the votaries of Hermes, soon becoming an indefatigable worker in his capacity of translator of Gnostic and Hermetic writings. Admittedly, many of his translations were from other modern languages as he was not trained in Coptic.