The Jefferson Bible – Life And Morals Of Jesus Of Nazareth

The book is Jefferson’s notions as to the life and doctrines of Jesus, and it is significant that he ends the Life with the laying of Jesus in the sepulchre. The resurrection formed no part of Jefferson’s belief. The doctrines selected by Jefferson as commending themselves to him are the precepts which the Christians sedulously avoid quoting. As a whole, he considered the doctrines of Jesus defective, and to have been made worse by the Christians, and so made a wee little book of the doctrines he deemed the best. 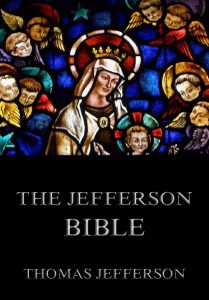 The Jefferson Bible – Life And Morals Of Jesus Of Nazareth

The Jefferson Bible – Life And Morals Of Jesus Of Nazareth.

Purpose of the Jefferson Bible (from wikipedia)

It is understood by some historians that Jefferson composed it for his own satisfaction, supporting the Christian faith as he saw it. Gaustad states, “The retired President did not produce his small book to shock or offend a somnolent world; he composed it for himself, for his devotion, for his assurance, for a more restful sleep at nights and a more confident greeting of the mornings.”

There is no record of this or its successor being for “the Use of the Indians,” despite the stated intent of the 1804 version being that purpose. Although the government long supported Christian activity among Indians, and in Notes on the State of Virginia Jefferson supported “a perpetual mission among the Indian tribes,” at least in the interest of anthropology, and as President sanctioned financial support for a priest and church for the Kaskaskia Indians, Jefferson did not make these works public. Instead, he acknowledged the existence of The Life and Morals of Jesus of Nazareth to only a few friends, saying that he read it before retiring at night, as he found this project intensely personal and private.

Ainsworth Rand Spofford, Librarian of Congress (1864–1894) stated: “His original idea was to have the life and teachings of the Saviour, told in similar excerpts, prepared for the Indians, thinking this simple form would suit them best. But, abandoning this, the formal execution of his plan took the shape above described, which was for his individual use. He used the four languages that he might have the texts in them side by side, convenient for comparison. In the book he pasted a map of the ancient world and the Holy Land, with which he studied the New Testament.”

Some speculate that the reference to “Indians” in the 1804 title may have been an allusion to Jefferson’s Federalist opponents, as he likewise used this indirect tactic against them at least once before, that being in his second inaugural address. Or that he was providing himself a cover story in case this work became public.

Also referring to the 1804 version, Jefferson wrote, “A more beautiful or precious morsel of ethics I have never seen; it is a document in proof that I am a real Christian, that is to say, a disciple of the doctrines of Jesus.”

Jefferson’s claim to be a Christian was made in response to those who accused him of being otherwise, due to his unorthodox view of the Bible and conception of Christ. Recognizing his rather unusual views, Jefferson stated in a letter (1819) to Ezra Stiles Ely, “You say you are a Calvinist. I am not. I am of a sect by myself, as far as I know.”