The Prophecies and Revelations of Saint Bridget of Sweden

Saint Bridget of Sweden was a mystic and saint, and founder of the Bridgettines after the death of her husband of twenty years. As a child, she had already believed herself to have visions; these became more frequent, and her records of these “Celestial revelations” obtained a great vogue during the Middle Ages. Her visions of the Nativity of Jesus had a great influence on depictions of the Nativity of Jesus in art. This edition contains all that is known today of the visions and prophecies of Saint Brigdet and most of her prayers. 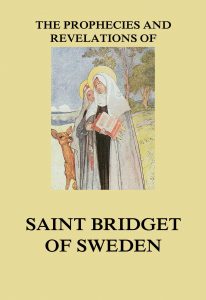 The Prophecies and Revelations of Saint Bridget of Sweden

The Prophecies and Revelations of Saint Bridget of Sweden.

Biography of Saint Bridget (from wikipedia.com)

The most celebrated saint of Sweden was the daughter of the knight Birger Persson of the family of Finsta, governor and lawspeaker of Uppland, and one of the richest landowners of the country, and his wife, a member of the so-called Lawspeaker branch of the Folkunga family. Through her mother, Ingeborg, Birgitta was related to the Swedish kings of her era.

She was born in June 1303. There is no exact recording for which precise date. In 1316, at the age of 14 she married Ulf Gudmarsson of the family of Ulvåsa, Lord of Närke, to whom she bore eight children, four daughters and four sons. Six survived infancy, which was rare at that time. Her eldest daughter was Märta Ulfsdotter. Her second daughter is now honored as St. Catherine of Sweden. Her youngest daughter was Cecilia Ulvsdotter. Bridget became known for her works of charity, particularly toward Östergötland’s unwed mothers and their children. When she was in her early thirties, she was summoned to be principal lady-in-waiting to the new Queen of Sweden, Blanche of Namur. In 1341 she and her husband went on pilgrimage to Santiago de Compostela.

In 1344, shortly after their return, Ulf died at the Cistercian Alvastra Abbey in Östergötland. After this loss, Birgitta became a member of the Third Order of St. Francis and devoted herself wholly to a life of prayer and caring for the poor and the sick.

It was about this time that she developed the idea of establishing the religious community which was to become the Order of the Most Holy Saviour, or the Brigittines, whose principal house at Vadstena was later richly endowed by King Magnus IV of Sweden and his queen. One distinctive feature of the pre-Reformation houses of the Order was that they were double monasteries, with both men and women forming a joint community, though with separate cloisters. They were to live in poor convents and to give all surplus income to the poor. However, they were allowed to have as many books as they pleased.

In 1350, a Jubilee Year, Bridget braved a plague-stricken Europe to make a pilgrimage to Rome accompanied by her daughter, Catherine, and a small party of priests and disciples. This was done partly to obtain from the Pope the authorization of the new Order and partly in pursuance of her self-imposed mission to elevate the moral tone of the age. This was during the period of the Avignon Papacy within the Roman Catholic Church, however, and she had to wait for the return of the papacy to Rome from the French city of Avignon, a move for which she agitated for many years.

It was not until 1370 that Pope Urban V, during his brief attempt to re-establish the papacy in Rome, confirmed the Rule of the Order, but meanwhile Birgitta had made herself universally beloved in Rome by her kindness and good works. Save for occasional pilgrimages, including one to Jerusalem in 1373, she remained in Rome until her death on 23 July 1373, urging ecclesiastical reform.

In her pilgrimages to Rome, Jerusalem and Bethlehem, she sent “back precise instructions for the construction of the monastery” now known as Blue Church, insisting that an “abbess, signifying the Virgin Mary, should preside over both nuns and monks.”

Bridget went to confession every day, and had a constant smiling face. Although she never returned to Sweden, her years in Rome were far from happy, being hounded by debts and by opposition to her work against Church abuses. She was originally buried at San Lorenzo in Panisperna before her remains were returned to Sweden. She was canonized in the year 1391 by Pope Boniface IX, which was confirmed by the Council of Constance in 1415. Because of new discussions about her works, the Council of Basel confirmed the orthodoxy of the revelations in 1436.