The Return of Sherlock Holmes

The book contains thirteen stories, in which Sherlock Holmes is even more astute, brilliant and astounding than ever before. He has kept pace with his readers, and offers them far more complex problems than of yore, which he unravels with even greater deftness. The same mystery, the same impending perils, the same hair-breadth escapes that thrilled in former volumes are present in this one. Among the stories are: 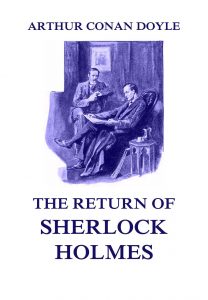 The Return of Sherlock Holmes

The Return of Sherlock Holmes.

Summaries of the stories included (from Wikipedia):

The Adventure of the Empty House

Sherlock Holmes astonishes Dr. Watson and the world by reappearing in London and revealing that he was not killed at the Reichenbach Falls in 1891, as stated in “The Final Problem”. Holmes outwits and defeats “the second most dangerous man in London,” Colonel Sebastian Moran, who attempts to kill Holmes, and resumes his practice as a consulting detective.

The Adventure of the Norwood Builder

A young lawyer named John Hector McFarlane asks Holmes to clear him of the charge murdering Jonas Oldacre soon after McFarlane prepared Oldacre’s will. Inspector Lestrade believes McFarlane to be guilty, but by using some forensic science and staging a fake fire, Holmes is able to flush the still-living Oldacre out of hiding.

The Adventure of the Dancing Men

Holmes and Watson stop a man from stalking a woman. Hilton Cubitt hires Holmes to help him find out who has been sending him weird encoded messages that are disturbing his wife. Holmes cracks the code. He arrives too late to prevent the death of Hilton and the attempted suicide of his wife, but is able to identify the criminal.

The Adventure of the Solitary Cyclist

Violet Smith consults Holmes because an unknown man has been following her by bicycle on her weekly trips from the house where she works as a music teacher to the railroad station. Smith recently met two friends of her deceased uncle. One of the men, Carruthers, hires Smith as a governess and then proposes to her, but Smith is already engaged and declines. The other man, Woodley, disturbs Smith with his comments and behavior. Holmes connects the clues and arrives in time to save Smith after she is kidnapped by Woodley.

The Adventure of the Priory School

A young heir disappears from a fancy boarding school, and the head of the school hires Holmes and Watson to find him. During their search they find a missing teacher dead and fear for the boy’s safety. Their search leads them back around to the boy’s own father, the Duke of Holdernesse, and his secretary James Wilder. When confronted, the Duke makes a shocking confession. James Wilder is no secretary at all, but the Duke’s illegitimate son. The supposed secretary hired a man named Reuben Hayes, to help him kidnap his younger half-brother in an effort to force his dad into making him a legitimate heir. The young boy is recovered safely and is reunited with his parents.

The Adventure of Black Peter

A ship captain named Peter Carey is found dead, stabbed through with a harpoon. A police inspector named Stanley Hopkins brings Holmes the case; Hopkins is being mentored by Holmes. Peter Carey was an abusive jerk, so it’s not surprising that he has enemies; but his murder is a total mystery. After a stakeout, Holmes, Watson, and Hopkins catch a guy named Neligan returning to the scene of the crime to retrieve some incriminating evidence. He swears he didn’t kill Peter though and Holmes believes him. After some more investigating, Holmes catches the real killer: Peter’s old first mate, Patrick Cains, who was trying to get in on a financial scheme that Peter had going.

The Adventure of Charles Augustus Milverton

Milverton is a notorious blackmailer who has ruined lots of people and caused many more grief. Holmes is hired by a lady who is being blackmailed by Milverton, and Holmes is determined to stop this guy once and for all. But Milverton is very crafty and Holmes can’t get anything on him. Finally, Holmes and Watson break into Milverton’s house in an effort to get the incriminating letters back for their client. While there, they end up witnessing Milverton’s murder by an angry mystery woman. The two hide what they know from the cops and never reveal the identity of Milverton’s killer.

The Adventure of the Six Napoleons

An unidentified man is breaking statues of Napoleon. What starts off as a weird nuisance quickly turns deadly after a statue owner finds a dead guy on his doorstep and a broken statue outside. Holmes figures out that the statues were all made by the same person, and he connects the dots back to an Italian named Beppo, who hid something in one of the statues. After catching Beppo, Holmes buys the last Napoleon statue and busts it open himself, revealing a famous pearl hidden inside.

The Adventure of the Three Students

While doing some research in a university town, a professor approaches Holmes and Watson for help. The professor is going to administer a scholarship exam in Greek the next day, and he says that someone has broken into his rooms and seen – maybe even copied – the exam. It’s a cheating scandal! Holmes narrows down the suspects to three students who live nearby. He stages a trap for Gilchrist, the least likely suspect. Gilchrist confesses and says he’s leaving school to get a job. Scandal averted.

The Adventure of the Golden Pince-Nez

Stanley Hopkins calls Holmes and Watson in on a baffling case. A young guy named Willoughby Smith, an assistant to a Professor Coram, has been murdered. Anyone could have entered the house, killed him, and run away. A pair of glasses are found on the body. After realizing that the killer needed glasses, Holmes puts other clues together and figures out that the murderer is still in the house. He finds her, a Russian woman named Anna. Anna is married to Professor Coram, also Russian, who betrayed his friends and fled the country. Anna came here to find evidence to free one of her friends from jail in Russia. She killed Willoughby by accident. After her confession she dies from a poison capsule that she took earlier.

The Adventure of the Missing Three-Quarter

A young rugby player named Cyril Overton barges in on Holmes and Watson and asks for help finding his missing teammate before their big game. The missing teammate is Godfrey Staunton and he disappeared with an older guy after sending a mysterious telegram. Holmes tracks him to a nearby area but is stonewalled by a Dr. Armstrong, who is protecting Staunton. Holmes finally figures out his location and discovers that Staunton was secretly married, and that his wife had fallen ill and recently died. Dr. Armstrong was a friend and tried to protect the young couple from scrutiny. Holmes and Watson leave the grieving Godfrey in peace and return home.

The Adventure of the Abbey Grange

Stanley Hopkins returns again and gets Holmes and Watson to help him out on a home invasion/murder case. A woman named Mary Fraser, wife of Sir Eustace Brackenstall, witnessed her husband’s murder. She says a gang of men broke into their home, killed her husband, tied her up, and stole some silver dishes. It all seems like a clear-cut case, but Holmes’s gut tells him otherwise. After some digging he realizes Mary Frasier is lying and confronts her with evidence that a man named Jack Crocker was involved. Jack confesses all. It turns out Sir Eustace was an abusive husband and that Jack and Mary were really in love. Jack came to see Mary and was confronted by Sir Eustace, whom he killed in self-defense. Afterwards, Jack, Mary, and her maid Theresa covered up the crime. Holmes agrees that Jack was justified and lets him go without reporting it to the police.

The Adventure of the Second Stain

Watson and Holmes are hired by the Prime Minister, Lord Bellinger, and the European Secretary, Trelawney Hope, to help recover a stolen political document. If the document gets into the wrong hands, it could spark a war. Holmes and Watson track the document to a spy named Eduardo Lucas, who has recently been murdered by his wife, who actually was married to one of his assumed identities. After some digging, Holmes realizes that Trelawney Hope’s wife has the letter. She was being blackmailed and delivered the letter to Eduardo, not realizing the trouble she would cause. After his murder she stole the letter back. Holmes quickly puts it back where it belongs, and the crisis is averted.