The Revealing Word – A Dictionary Of Metaphysical Terms – Charles Fillmore

This book is the ultimate biblical reference for metaphysical terms from A to Z or from “abate” to “zeal”. Everything you will ever need to know or want to know is now ready for discovery. 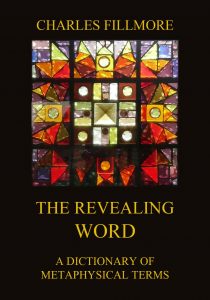 Biography of Charles Fillmore (from wikipedia.com)

An ice skating accident when he was ten broke Fillmore’s hip and left him with lifelong disabilities. In his early years, despite little formal education, he studied Shakespeare, Tennyson, Emerson and Lowell as well as works on spiritualism, Eastern religions, and metaphysics.

He met his future wife, Mary Caroline Page, known as Myrtle, in Denison, Texas in the mid-1870s. After losing his job there, he moved to Gunnison, Colorado where he worked at mining and real estate.

He married Myrtle in Clinton, Missouri on March 29, 1881 and the newlyweds moved to Pueblo, Colorado, where Charles established a real estate business with the brother-in-law of Nona Lovell Brooks, who was later to found the Church of Divine Science.