“The Sacred Writings Of …” provides you with the essential works among the Christian writings. The volumes cover the beginning of Christianity until medieval times. This edition contains Origen’s main works, “Origen De Principiis” and “Origen against Celsus”. The works are brought to you on more than 700 pages, including more than 3000 valuable annotations. 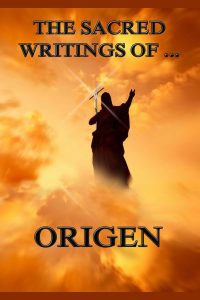 The Sacred Writings of Origen.

Short biography of Origen (from wikipedia)

Origen (184/185 – 253/254), was a Greek scholar, ascetic, and early Christian theologian who was born and spent the first half of his career in Alexandria. He was a prolific writer in multiple branches of theology, including textual criticism, biblical exegesis and hermeneutics, philosophical theology, preaching, and spirituality written in Greek. He was anathematised at the Second Council of Constantinople. He was one of the most influential figures in early Christian asceticism.

Unlike many church fathers, he was never canonised as a saint because some groups believed that some of his teachings contradicted those attributed to the apostles, notably the Apostles Paul and John. His teachings on the pre-existence of souls, the final reconciliation of all creatures, including perhaps even the devil (the apokatastasis), and his possible belief that God the Son was subordinate to God the Father, were rejected by Christian orthodoxy.