Commentary on the Song of Songs

Commentary on the Song of Songs – Saint Bernard of Clairvaux

The Song of Songs is a book of the Hebrew Bible, also known as Canticle of Canticles or simply Canticles. St. Bernard wrote 43 beautiful sermons on this book. He interprets the song of songs in reference to the love between God and the soul. God is deeply in love with us, and wills our love in return. This love between the soul and God, which is the most intimate love possible, is expressed in the analogy of bride and bridegroom, where the intimacy of love is especially expressed. 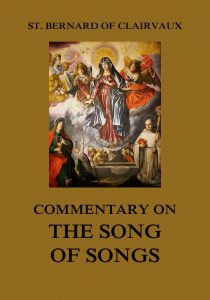 Commentary on the Song of Songs

Commentary on the Song of Songs.

Summary of the Song of Songs (from wikipedia)

The introduction calls the poem “the song of songs”, a superlative construction commonly used in Scriptural Hebrew to show something as the greatest and most beautiful of its class (as in Holy of Holies). The poem proper begins with the woman’s expression of desire for her lover and her self-description to the “daughters of Jerusalem”: she insists on her blackness, likening it to the “tents of Kedar” (nomads) and the “curtains of Solomon”. A dialogue between the lovers follows: the woman asks the man to meet; he replies with a lightly teasing tone. The two compete in offering flattering compliments (“my beloved is to me as a cluster of henna blossoms in the vineyards of En Gedi”, “an apple tree among the trees of the wood”, “a lily among brambles”, while the bed they share is like a forest canopy). The section closes with the woman telling the daughters of Jerusalem not to stir up love such as hers until it is ready.

The woman recalls a visit from her lover in the springtime. She uses imagery from a shepherd’s life, and she says of her lover that “he pastures his flock among the lilies”.

The woman again addresses the daughters of Jerusalem, describing her fervent and ultimately successful search for her lover through the night-time streets of the city. When she finds him she takes him almost by force into the chamber in which her mother conceived her. She reveals that this is a dream, seen on her “bed at night” and ends by again warning the daughters of Jerusalem “not to stir up love until it is ready”.

The next section reports a royal wedding procession. Solomon is mentioned by name, and the daughters of Jerusalem are invited to come out and see the spectacle.

The man describes his beloved: Her hair is like a flock of goats, her teeth like shorn ewes, and so on from face to breasts. Place-names feature heavily: her neck is like the Tower of David, her smell like the scent of Lebanon. He hastens to summon his beloved, saying that he is ravished by even a single glance. The section becomes a “garden poem”, in which he describes her as a “locked garden” (usually taken to mean that she is chaste). The woman invites the man to enter the garden and taste the fruits. The man accepts the invitation, and a third party tells them to eat, drink, “and be drunk with love”.

The woman tells the daughters of Jerusalem of another dream. She was in her chamber when her lover knocked. She was slow to open, and when she did, he was gone. She searched through the streets again, but this time she failed to find him and the watchmen, who had helped her before, now beat her. She asks the daughters of Jerusalem to help her find him, and describes his physical good looks. Eventually, she admits her lover is in his garden, safe from harm, and committed to her as she is to him.

The man describes his beloved; the woman describes a rendezvous they have shared. (The last part is unclear and possibly corrupted.)

The people praise the beauty of the woman. The images are the same as those used elsewhere in the poem, but with an unusually dense use of place-names, e.g., pools of Hebron, gate of Bath-rabbim, tower of Damascus, etc. The man states his intention to enjoy the fruits of the woman’s garden. The woman invites him to a tryst in the fields. She once more warns the daughters of Jerusalem against waking love until it is ready.

The woman compares love to death and sheol: love is as relentless and jealous as these two, and cannot be quenched by any force. She summons her lover, using the language used before: he should come “like a gazelle or a young stag upon the mountain of spices”.