The Sacred Writings of the Apocrypha of the New Testament

While the early Church exercised proper discernment, and the Canon of the New Testament was soon definitely recognised and universally accepted, the apocryphal writings were not without influence. The sacred legends, the ecclesiastical traditions, all too potent in their effect, are in many cases to be traced to these writings. Much that Rome inculcates is derived from these books, which the Western Church constantly rejected. 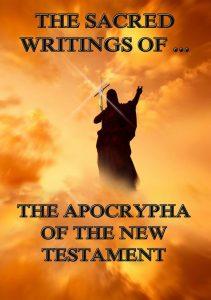 The Sacred Writings of the Apocrypha of the New Testament

The Sacred Writings of the Apocrypha of the New Testament.

Basics on Apocrypha (from wikipedia)

Apocrypha is commonly applied in Christian religious contexts involving certain disagreements about biblical canonicity. Apocryphal writings are a class of documents rejected by some as being either pseudepigraphical and/or unworthy to be properly called Scripture, though, as with other writings, they may sometimes be referenced for support, such as the Book of Jasher. While writings that are now accepted by Christians as Scripture were recognized as being such by various believers early on, the establishment of a largely settled uniform canon was a process of centuries, and what the term “canon” (as well as “apocrypha”) precisely meant also saw development. The canonical process took place with believers recognizing writings as being inspired by God from known or accepted origins, subsequently being followed by official affirmation of what had become largely established through the study and debate of the writings. The Roman Catholic church provided its first dogmatic definition of her entire canon in 1546, which put a stop to doubts and disagreements about the status of the Apocrypha, as well as certain other books, which had continued from the beginning of the NT church. The leader of the Protestant Reformation, Martin Luther, like the Catholic church father Jerome (and certain others), favored the Masoretic canon for the Old Testament, excluding apocryphal books in his non-binding canon as being worthy to properly be called Scripture, but included most of them in a separate section, as per Jerome. Luther also doubted the canonicity of four New Testament books (Hebrews, James and Jude, and Revelation), which judgment Protestantism did not follow, but he did not title them Apocrypha.

Explaining the Eastern Orthodox Church’s canon is made difficult because of differences of perspective with the Roman Catholic church in the interpretation of how it was done. Today Orthodox accept a few more books than appear in the Catholic canon.