An all-time childrens’ classic and a pretty story of a walled-in garden in Yorkshire, which is discovered by little Mary Lennox and a robin. She was a lonely, delicate little girl who had been sent from India to be cared for by an uncle who was twisted in body, and in mind through the tragedy of his young wife’s death. Colin, his little son, is a spoiled invalid, but he and Mary Lennox and a Yorkshire lad called Dickon, who can charm all wild things of the moor, and old Ben Weatherstaff, a crabbed gardener, and the robin all share the “secret garden,” and plant things and trim vines and watch things grow. The garden belonged to Colin’s mother, and had lain neglected until Mary found the buried key. Here they regained health and happiness, and Colin’s father returns from his travels to find his son straight and strong, and not deformed as he had feared. 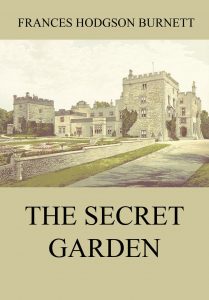