The Secret of the Tower

The Secret of the Tower – Anthony Hope

The Secret of the Tower, by Anthony Hope, was received by the author’s many admirers with enthusiastic pleasure, for it was many a moon since he has written a novel, not indeed since the war. The present tale is a mystery story with all the thrilling and hair-raising situations that the most exacting lover of baffling, romantic mystery novels could desire. The scene is laid in England after the great war and much mystery surrounds the occupants of the “Tower,” an old man, his companion and his servant. Much speculation as to their mode of living and the secretiveness of their weekly trips to London with a brown leather bag, which always accompanies them on their journey, finally overcomes the curiosity of the servant who enters into a conspiracy with confederates to discover the meaning of it all. It is at this critical moment that the old man is taken ill and his companion, an ex-army officer, finds it necessary to call in a woman doctor of the neighborhood to attend him. Disclosures come thick and fast upon her arrival and the situations become very intense, but explanations clarify the atmosphere and the wheels of love run smoothly for all concerned, leaving the fortune, which had played such a mysterious part in the big thrilling plot to those who made gold their god. 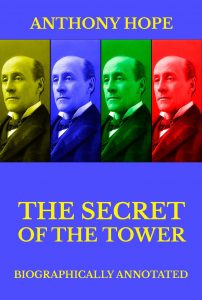 The Secret of the Tower

The Secret of the Tower.