The Old Testament is more full of parables than the New. Its history is prophetic. Its stories are parables in real life. The chronicles of Israel are full of God’s foreshadowings of the redemption of the world. From the Fall in Eden to the restoration of the Jews under Ezra, there are, all along the way, fingerposts that point to the Cross of Christ. Their inscriptions are sometimes so plain that the wayfaring man, though a fool, need not err therein. They are sometimes so obscured that the heedless traveler notes them not. These finger-posts Iare what the author seeks to decipher, these parables to interpret. The light that shines from the Old Testament is that of the Star of Bethlehem, which conducts the reader to the manger of his Incarnate Lord. There is a vividness in Mr. Abbotts descriptions that is delightful. The old fields, that have been culled by so many gleaners, are vitalized into reproductiveness. 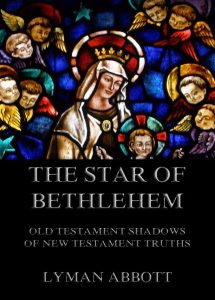 The definition of Theophany (from wikipedia.com)

This term has been used to refer to appearances of the gods in the ancient Greek and Near Eastern religions. While the Iliad is the earliest source for descriptions of theophanies in the Classical tradition/era (and they occur throughout Greek mythology), probably the earliest description of a theophany is in the Epic of Gilgamesh.

The term theophany has acquired a specific usage for Christians and Jews with respect to the Bible: It refers to the manifestation of God to people; the sensible sign by which the presence of God is revealed. Only a small number of theophanies are found in the Hebrew Bible, also known as the Old Testament.