The Story Of Frithiof (Fully Illustrated)

Mr. Henderson’s beautiful prose translation of the “Frithiof Saga” ought to make that famous work, originally a poem, better known in English-speaking countries than it is today. How it has happened that a work which has been translated into the Danish, Norwegian, German, English, French, Russian, and Latin languages, and which is to be found in almost every house in Sweden, should be so little known amongst ourselves, it is difficult to explain; but that such is the case, we may gather from the translator’s candid avowal that he had sent his own version to be printed before he discovered that any previous translation existed; nevertheless, no fewer than four Englishmen had preceded him in the undertaking, the earliest in 1835. The Scandinavian Saga upon which Bishop Tegnér founded his beautiful poem, is the most popular, and one of the best authenticated of all the northern legends, and is attributed by Müller to the end of the thirteenth, or beginning of the fourteenth century. Mr. Henderson’s translation is very faithful and spirited, but those acquainted with the original Swedish will hardly agree with him in thinking that it would not have been better still had it been made from that, and not from the German, which, however excellent and worthy of its author’s fame as a poet, is not the language in which Esaias Tegnér thought. This edition is beautifully illustrated with works of the Swedish painter August Malmström. 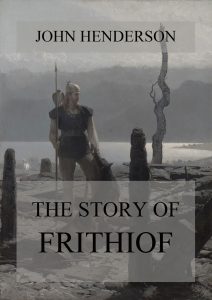 The Story Of Frithiof (Fully Illustrated).

The Story Of Frithiof (Fully Illustrated).

Spring returned once more to gladden the earth with its brightness, and Friga adorned the hills, fields, and valleys with a brilliant carpet of flowers, and called forth again the melody of the sweet songsters of the woods. On a calm evening, when the air was fragrant with perfume, Ingeborg, Frithiof, and Hilding ascended a hill overlooking the sea, and sat down on a large moss-covered stone. At the request of Ingeborg, the old man told them the story of the sad and untimely death of the god Balder.

“Balder,” said Hilding, “was the son of the all-powerful god Odin and his beautiful queen Friga. His countenance was of wondrous beauty, and when he swept through the heavens on his white charger, a glow of light and splendor attended him. Ho was averse to evil, and hated quarrelling and strife with all his heart. Wise and eloquent, gentle and upright, he strove perpetually to promote peace and goodwill, to avert misfortune, and to remove sorrow and distress. He sometimes took the form of a warrior, and mingled with the combatants in the noise and fury of battle; but never was he tempted, in the heat of the contest, to draw his heavenly weapons against mortals. While some of the other gods took part in the strife and bloodshed, love and pity alone led Balder to the scene of death. One day in the middle of summer, he observed that the warriors were nearly exhausted from thirst. Striking the ground with his lance, a refreshing stream of water immediately burst forth, and in other places water sprang up even at the touch of bis horse’s hoofs. These fountains never ceased to flow, and were surrounded by groves of trees, in which Balder is honored and worshipped to this day. His wife, the beautiful goddess Nanna, was as amiable as her husband; and their palace stands far above the clouds, never to be penetrated by the gaze of mortals, and free from the slightest stain of sin or impurity.

Balder was beloved by all the gods except the wicked Loki, who thought of nothing but evil and mischief. It happened one night that Balder had a very unpleasant dream, and believed that his life was in danger. He tried to drive the remembrance of it from his mind, but it was in vain, so he became melancholy and sad at heart.

Not only Balder’s wife, the blue-eyed Nanna, but Odin and Friga, and all the other gods and goddesses, save Loki, were filled with sorrow and anxiety when they heard the gloomy forebodings which oppressed his heart. It was in vain that Odin meditated upon the dream — in vain that he held councils with the other gods, and inquired from the white ravens, to which the past and the future were alike known; he was quite unable to ascertain the danger which threatened his favorite son. At last, in despair, he determined upon undertaking the perilous journey to the abode of the goddess of destiny. He rose from his brilliant throne, left his palace, mounted the steed which stood ready at the gate, and attended by the two ravens and the two wolves, the companions of all his journeys, fled with the speed of lightning towards the earth, and soon reached the pathway leading to the dark and mysterious abyss in which the pale goddess Hela held her court.

Far from the Valhalla, the palace of Odin and the dwelling of the heroes, lies the awful and gloomy abode of the implacable Hela. Loki is her father; her mother is a giantess, the sister of the terrible wolf Fenrix and of the serpent that coils round the earth. Unhappy, thrice unhappy, is he who must descend to the dismal abyss of the goddess of destruction! Her hall is named Misery, Decay is written upon her threshold, Consumption is her couch; Danger, the curtains; Laziness is her manservant, and Sloth her maid; she eats from the dish called Hunger, and insatiable Avarice is the knife with which she cuts.

‘Within the gloomy cavern there stands a hideous throne,

‘Tis builded up of human bones and skulls of men alone;

Upon it sits the goddess, her form of ashy gray,

Her face blood-stained and ghastly, and blue with foul decay.

Her temple is surrounded with massive palisades,

With human heads most awful upon its stanchions raised;

And round about her wander, in dark and vicious mood,

Odin was rapidly approaching this awful realm of the goddess of death. The path, which no mortal had ever before trodden, wound along the brink of terrible precipices, and was overhung by threatening cliffs; but Odin cared not for the terrors of the way, or the raging hounds which met him; one thought took up all his attention — to learn what danger threatened his favorite son.

At last he reached the dwelling of the goddess Hela, and leaped from his horse at the first gray Runic stone, beneath which one of the Nornes, who foretold events, had slept for thousands of years. Lone and dreary was the burying-place; the wind moaned sadly through the leafless hedges, and whirled clouds of sand high in the air.

Odin drew his sword, wrote thrice on the sand the Runic sentence, and then uttered three times the Runic call, which is powerful enough, when coming from the mouth of one of the gods, to rouse the dead from their graves.

He paused a few moments, and then the following words came forth from the depths of the earth in a low and hollow tone:

Calls me from the dungeon’s nighty

Tell me thy name, thou daring guest!

A thousand years my bones have lain

In winter’s snow or summer’s heat.

Profane! I disturb’st thou my deep rest?

Tell me, who art thou, daring guest? ‘

A warrior’s son, thou namest not.

What Heav’n ordains, tell I to thee;

What ‘s planned below reveal to me.

For whom is the glittering table spread.

And who shall sleep on the golden bed? ‘