When Patty Went To College

Of all the college stories that have been published in the past hundred or so years, those gathered by Jean Webster into her book ‘When Patty Went to College’ are among the best. Never before has that subtle and much-abused thing known as ” college atmosphere” been so well transferred into type as in this book, the happy-go-lucky irresponsibility, tempered by a vein of conscientiousness, inconsistent and bewildering, that makes the ordinary undergraduate an inexplicable puzzle to the outsider. Miss Patty Wyatt, who furnishes the foreground for the fifteen stories contained in the book, amply exempli¿es this bewildering many sidedness. She is ever just in or just out of difficulty, and yet her fun is managed with such frankness and open audacity and such freedom from malice that it always leaves a pleasant taste behind. The book is deeply interesting and thoroughly readable. In fact, it deserves a second reading as well as a first, so natural and spontaneous is its charm. 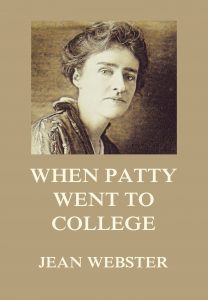 When Patty Went To College.

When Patty Went To College.

“PAPER-WEIGHTS,” observed Patty, sucking an injured thumb, “were evidently not made for driving in tacks. I wish I had a hammer.”

This remark called forth no response, and Patty peered down from the top of the step-ladder at her room-mate, who was sitting on the floor dragging sofa-pillows and curtains from a dry-goods box.

“Priscilla,” she begged, “you aren’t doing anything useful. Go down and ask Peters for a hammer.”

Priscilla rose reluctantly. “I dare say fifty girls have already been after a hammer.”

“Oh, he has a private one in his back pocket. Borrow that. And, Pris,”—Patty called after her over the transom,—”just tell him to send up a man to take that closet door off its hinges.”

Patty, in the interval, sat down on the top step and surveyed the chaos beneath her. An Oriental rush chair, very much out at the elbows, several miscellaneous chairs, two desks, a divan, a table, and two dry-goods boxes radiated from the center of the room. The floor, as it showed through the interstices, was covered with a grass-green carpet, while the curtains and hangings were of a not very subdued crimson.

“One would scarcely,” Patty remarked to the furniture in general, “call it a symphony in color.”

A knock sounded on the door.

A girl in a blue linen sailor-suit reaching to her ankles, and with a braid of hair hanging down her back, appeared in the doorway. Patty examined her in silence. The girl’s eyes traveled around the room in some surprise, and finally reached the top of the ladder.

“My dear,” murmured Patty, in a deprecatory tone, “I should have taken you for a senior; but”—with a wave of her hand toward the nearest dry-goods box—”come in and sit down. I need your advice. Now, there are shades of green,” she went on, as if continuing a conversation, “which are not so bad with red; but I ask you frankly if that shade of green would go with anything?”

The freshman looked at Patty, and looked at the carpet, and smiled dubiously. “No,” she admitted; “I don’t believe it would.”

“I knew you would say that!” exclaimed Patty, in a tone of relief. “Now what would you advise us to do with the carpet?”

The freshman looked blank. “I—I don’t know, unless you take it up,” she stammered.

“The very thing!” said Patty. “I wonder we hadn’t thought of it before.”

Priscilla reappeared at this point with the announcement, “Peters is the most suspicious man I ever knew!” But she stopped uncertainly as she caught sight of the freshman.

“Priscilla,” said Patty, severely, “I hope you didn’t divulge the fact that we are hanging the walls with tapestry”—this with a wave of her hand toward the printed cotton cloth dangling from the molding.

“I tried not to,” said Priscilla, guiltily, “but he read ‘tapestry’ in my eyes. He had no sooner looked at me than he said, ‘See here, miss; you know it’s against the rules to hang curtains on the walls, and you mustn’t put nails in the plastering, and I don’t believe you need a hammer anyway.'”

“But,” continued Priscilla, hastily, “I stopped and borrowed Georgie Merriles’s hammer on my way back. Oh, I forgot,” she added; “he says we can’t take the closet door off its hinges—that as soon as we get ours off five hundred other young ladies will be wanting theirs off, and that it would take half a dozen men all summer to put them back again.”

A portentous frown was gathering on Patty’s brow, and the freshman, wishing to avert a possible domestic tragedy, inquired timidly, “Who is Peters?”

“Peters,” said Priscilla, “is a short, bow-legged gentleman with a red Vandyke beard, whose technical title is janitor, but who is really dictator. Every one is afraid of him—even Prexy.”

“I’m not,” said Patty; “and,” she added firmly, “that door is coming down whether he says so or not, so I suppose we shall have to do it ourselves.” Her eyes wandered back to the carpet and her face brightened. “Oh, Pris, we’ve got a beautiful new scheme. My friend here says she doesn’t like the carpet at all, and suggests that we take it up, get some black paint, and put it on the floor ourselves. I agree,” she added, “that a Flemish oak floor covered with rugs would be a great improvement.”

Priscilla glanced uncertainly from the freshman to the floor. “Do you think they’d let us do it?”

“It would never do to ask them,” said Patty.

The freshman rose uneasily. “I came,” she said hesitatingly, “to find out—that is, I understand that the girls rent their old books, and I thought, if you wouldn’t mind—”

“It—it was a Latin dictionary I wanted,” said the freshman, “and the girls next door said perhaps you had one.”

“A beautiful one,” said Patty.

“No,” interrupted Priscilla; “hers is lost from O to R, and it’s all torn; but mine,”—she dived down into one of the boxes and hauled out a chunky volume without any covers,—”while it is not so beautiful as it was once, it is still as useful.”

“Mine’s annotated,” said Patty, “and illustrated. I’ll show you what a superior book it is,” and she began descending the ladder; but Priscilla charged upon her and she retreated to the top again. “Why,” she wailed to the terrified freshman, “did you not say you wanted a dictionary before she came back? Let me give you some advice at the beginning of your college career,” she added warningly. “Never choose a room-mate bigger than yourself. They’re dangerous.”

The freshman was backing precipitously toward the door, when it opened and revealed an attractive-looking girl with fluffy reddish hair.

“Pris, you wretch, you walked off with my hammer!”

“Oh, Georgie, we need it worse than you do! Come in and help tack.”

“Hello, Georgie,” called Patty, from the ladder. “Isn’t this room going to be beautiful when it’s finished?”

Georgie looked about. “You are more sanguine than I should be,” she laughed.

“You can’t tell yet,” Patty returned. “We’re going to cover the wall-paper with this red stuff, and paint the floor black, and have dark furniture, and red hangings, and soft lights. It will look just like the Oriental Room in the Waldorf.”

“How in the world,” Georgie demanded, “do you ever make them let you do all these things? I stuck in three innocent little thumb-tacks to-day, and Peters descended upon me bristling with wrath, and said he’d report me if I didn’t pull them out.”

“You’ve got enough to do if you expect to get settled by Monday,” Georgie remarked.

“C’est vrai,” agreed Patty, descending the ladder with a sudden access of energy; “and you’ve got to stay and help us. We have to get all this furniture moved into the bedrooms and the carpet up before we even begin to paint.” She regarded the freshman tentatively. “Are you awfully busy?”

“Not very. My room-mate hasn’t come yet, so I can’t settle.”

“That’s nice; then you can help us move furniture.”

“Patty!” said Priscilla, “I think you are too bad.”

“I should really love to stay and help, if you’ll let me.”

“Certainly,” said Patty, obligingly. “I forgot to ask your name,” she continued, “and I don’t suppose you like to be called ‘Freshman’; it’s not specific enough.”

“My name is Genevieve Ainslee Randolph.”

“Genevieve Ains—dear me! I can’t remember anything like that. Do you mind if I call you Lady Clara Vere de Vere for short?”

The freshman looked doubtful, and Patty proceeded: “Lady Clara, allow me to present my room-mate Miss Priscilla Pond—no relation to the extract. She’s athletic and wins hundred-yard dashes and hurdle races, and gets her name in the paper to a really gratifying extent. And my dear friend Miss Georgie Merriles, one of the oldest families in Dakota. Miss Merriles is very talented—sings in the glee club, plays on the comb—”