In this novel a study is presented of a common enough American experience, but from a new point of view. Copley, the wheat king, has cornered the American supply of wheat. His daughter Marcia, who is in Italy, is forced to see the people starving and rebellious because her father’s maneuvers in the market have raised the price of daily bread. Her uncle, with whom she is living, endeavors to lighten the suffering which his brother has caused by distributing money among the starving Italians; but his generosity is misunderstood, and his niece is hooted and almost mobbed in the street as the “Wheat princess,” who is helping to grind the faces of the poor. Lawrence Sybert, the secretary of the American legation at Rome, appears as the man of mystery both protecting and reproving the people. Of course, there are other characters, many of them, but they amount to little in the general current of the story, which is strong, graphic, and truthful. 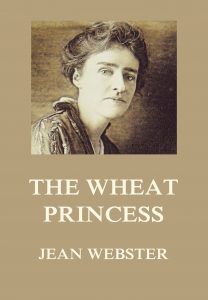 It was late and the studio was already well filled when two new-comers were ushered into the room—one a woman still almost young, and still (in a kindly light) beautiful; the other a girl emphatically young, her youth riding triumphant over other qualities which in a few years would become significant. A slight, almost portentous, hush had fallen over the room as they crossed the threshold and shook hands with their host. In a group near the door a young man—it was Laurence Sybert, the first secretary of the American Embassy—broke off in the middle of a sentence with the ejaculation: ‘Ah, the Wheat Princess!’

‘Be careful, Sybert! She will hear you,’ the grey-haired consul-general, who stood at his elbow, warned.

Sybert responded with a laugh and a half-shrug; but his tones, though low, had carried, and the girl flashed upon the group a pair of vivid hazel eyes containing a half-puzzled, half-questioning light, as though she had caught the words but not the meaning. Her vague expression changed to one of recognition; she nodded to the two diplomats as she turned away to welcome a delegation of young lieutenants, brilliant in blue and gold and shining boots.

‘Who is she?’ another member of the group inquired as he adjusted a pair of eye-glasses and turned to scrutinize the American girl—she was American to the most casual observer, from the piquant details of her gown to the masterly fashion in which she handled her four young men.

‘Don’t you know?’ There was just a touch of irony in Sybert’s tone. ‘Miss Marcia Copley, the daughter of the American Wheat King—I fancy you’ve seen his name mentioned in the papers.’

‘Well, well! And so that’s Willard Copley’s daughter?’ He readjusted his glasses and examined her again from this new point of view. ‘She isn’t bad-looking,’ was his comment. ‘The Wheat Princess!’ He repeated the phrase with a laugh. ‘I suppose she has come over to marry an Italian prince and make the title good?’

The originator of the phrase shrugged anew, with the intimation that it was nothing to him who Miss Marcia Copley married.

‘And who is the lady with her?’

It was Melville, the consul-general, who replied.

‘Her aunt, Mrs. Howard Copley. They live in the Palazzo Rosicorelli.’

‘Ah, to be sure! Yes, yes, I know who they are. Her husband’s a reformer or a philanthropist, or something of the sort, isn’t he? I’ve seen him at the meets. I say, you know,’ he added, with an appreciative smile, ‘that’s rather good, the way the two brothers balance each other. Philanthropist and Wheat King!’

An English girl in the group turned and studied the American girl a moment with a critical scrutiny. Marcia Copley’s appearance was daintily attractive. Her hat and gown and furs were a burnished brown exactly the colour of her hair; every little accessory of her dress was unobtrusively fastidious. Her whole bearing, her easy social grace, spoke of a past in which the way had been always smoothed by money. She carried with her a touch of imperiousness, a large air of commanding the world. The English girl noted these things with jealous feminine eyes.

‘Really,’ she said, ‘I don’t see how she has the audacity to face people. I should think that every beggar in the street would be a reproach to her.’

‘There were beggars in Italy long before Willard Copley cornered wheat,’ Melville returned.

‘If what the Tribuna says is true,’ some one ventured, ‘Howard Copley is as much implicated as his brother.’

‘I dare say,’ another laughed; ‘millionaire philanthropists have a way of taking back with the left hand what they have given with the right.’

Sybert had been listening in a half-indifferent fashion to the strictures on the niece, but in response to the implied criticism of the uncle he shook his head emphatically.

‘Howard Copley is no more implicated in the deal than I am,’ he declared. ‘He and his brother have had nothing to do with each other for the last ten years. His philanthropy is honest, and his money is as clean as any fortune can be.’

The statement was not challenged. Sybert was known to be Howard Copley’s friend, and he further carried the reputation of being a warm partizan on the one or two subjects which engaged his enthusiasm—on those which did not engage it he was nonchalant to a degree for a rising diplomat.

The two—Sybert and the consul-general—with a nod to the group presently drifted onward toward the door. The secretary was bent upon departure at the earliest possible opportunity. Teas were a part of the official routine of his life, but by the simple device of coming late and leaving early he escaped as much of their irksomeness as possible. Aside from being secretary of the Embassy, Sybert was a nephew of the ambassador, and it was the latter calling which he found the more onerous burden of the two. His Excellency had formed a troublesome habit of shifting social burdens to the unwilling shoulders of the younger man.

They paused at Mrs. Copley’s elbow with outstretched hands, and were received with a flattering show of cordiality from the aunt, though with but a fleeting nod from the niece; she was, patently, too interested in her officers to have much attention left.

‘Where is your husband?’ Sybert asked.

The lady raised her eyebrows in a picturesque gesture.

‘Beggars,’ she sighed. ‘Something has happened to the beggars again.’ Mr. Copley’s latest philanthropic venture had been the ‘Anti-Begging Society.’ Bread-tickets had been introduced, the beggars were being hunted down and given work, and as a result Copley’s name was cursed from end to end of Rome.

The men smilingly murmured their commiserations.

‘And what are you two diplomats doing here?’ Mrs. Copley asked. ‘I thought that Mr. Dessart invited only artists to his teas.’

Sybert’s gloomy air, as he eyed the door, reflected the question. It was Melville who answered:

‘Oh, we are admirers of art, even if we are not practitioners. Besides, Mr. Dessart and I are old friends. We used to know each other in Pittsburg when he was a boy and I was a good deal younger than I am now.’

His gaze rested for a moment upon their host, who formed one of the hilarious group about Miss Copley. He was an eminently picturesque young fellow, fitted with the usual artist attributes—a velveteen jacket, a flowing necktie, and rather long light-brown hair which constantly got into his eyes, causing him to shake his head impatiently as he talked. He had an open, frank face, humorous blue eyes and the inestimable, eager air of being in love with life.

The conversation showing signs of becoming general, the officers, with visible reluctance, made their bows and gave place to the new-comers. The girl now found time to extend a cordial hand to Melville, while to the secretary she tossed a markedly careless, ‘Good afternoon, Mr. Sybert.’ If Miss Marcia’s offhand manner conveyed something a trifle stronger than indifference, so Sybert’s half-amused smile as he talked to her suggested that her unkindness failed to hurt; that she was too young to count.

‘And what is this I hear about your moving out to a villa for the spring?’ he inquired, turning to Mrs. Copley.

‘Yes, we are thinking of it, but it is not decided yet.’

‘We still have Uncle Howard to deal with,’ added the girl. ‘He was the first one who suggested a villa, but now that exactly the right one presents itself, we very much suspect him of trying to back out.’

‘That will never do, Miss Marcia,’ said Melville. ‘You must hold him to his word.’

‘We are going out to-morrow to inspect it, and if Aunt Katherine and I are pleased——’ She broke off with a graceful gesture which intimated much.

The arrival of fresh guests called their host away, and Mrs. Copley and Melville, turning aside to greet some friends, left Miss Copley for the moment to a tête à tête with Sybert. He maintained his side of the conversation in a half-perfunctory fashion, while the girl allowed a slight touch of hostility to creep beneath her animation.

‘And where is the villa to be, Miss Marcia—at Frascati, I suppose?’

‘Farther away than Frascati; at Castel Vivalanti.’

‘Up in the Sabine hills between Palestrina and Tivoli.’

‘Oh, I know where it is; I have a vivid recollection of climbing the hill on a very hot day. I was merely exclaiming at the locality; it’s rather remote, isn’t it?’

‘Its remoteness is the best thing about it. Our object in moving into the hills is to escape from visitors, and if we go no farther than Frascati we shan’t do much escaping.’

This to the family’s most frequent visitor was scarcely a hospitable speech, and a smile of amusement crept to the corners of Sybert’s mouth.

Apparently just becoming aware of the content of her speech, she added with slightly exaggerated sweetness: ‘Of course I don’t mean you, Mr. Sybert. You come so often that I regard you as a member of the household.’

The secretary apparently had it on his tongue to retort, but, thinking better of it, he maintained a discreet silence, while their host approached with the new arrivals—a lady whose name Miss Copley did not catch, but who was presented with the explanatory remark, ‘she writes,’ and several young men who, she judged by their neckties, were artists also. The talk turned on the villa again, and Miss Copley was called upon for a description.