The Works of John Adams Vol. 3

John Adams was the second President of the United States, ruling the country from 1797 to 1801, and one of the Founding Fathers. He was also a major leader of American independence from Great Britain. This is volume three out of ten of his works, this book containing a part of his diary, an autobiography and essays. The text is annotated with more than 200 endnotes. 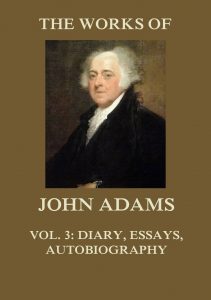 The Works of John Adams Vol. 3

The Works of John Adams Vol. 3.