The Works of John Adams Vol. 4

John Adams was the second President of the United States, ruling the country from 1797 to 1801, and one of the Founding Fathers. He was also a major leader of American independence from Great Britain. This is volume four out of ten of his works, this book containing Novanglus, Thoughts on the Government and the first Defence of the Constitution. The text is annotated with more than 380 endnotes. 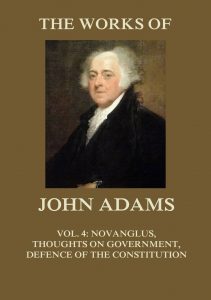 The Works of John Adams Vol. 4

The Works of John Adams Vol. 4.