Walter Bagehot was one of the most famous 19th-century British journalists and essayists, whose major works refer to government, economics, and literature. This is the ninth out of nine volumes with his most important writings, this one containing a wealth of essays thar he wrote for The Economist and The Saturday Review:

Mr. Disraeli
Lord Macaulay
The Death Of Count Cavour
The Limit Of Defensive Outlay
Mr. Stansfeld And Signor Mazzini
The Assassination Of Mr. Lincoln
Politics As A Profession
Oxford And Mr. Gladstone
Mr. Carlyle On Mr. Eyre
Why Mr. Disraeli Has Succeeded
Ath Of Lord Brougham
Lord Lawrence
The Uses Of Scotch Liberalism
… and many more … 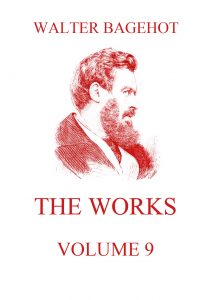