Doyle is evidently gifted with the remarkable talent to successfully stand with the peers in the arena of book writing. ” Sherlock Holmes ” was his master creation among the mysterious in character delineation. Then came “The Refugees,” “Micah Clark,” “Rodney Stone” and other works of an entirely different character. “Uncle Bernac” is an historical romance dealing with Napoleon’s threatened invasion of England. The hero crosses from England into France and has many dramatic and remarkable experiences. In the field of fiction Conan Doyle’s books are among the best sellers. “Uncle Bernac,” a Memory of the Empire, makes no exeception there. 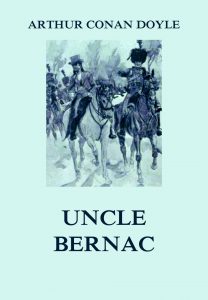