“Rodney Stone” is a rattling good novel, and we use the phrase advisedly as conveying a better notion of the book’s excellent qualities than might be given by some more elaborate and courtly turn of language. The pages are full of life, and this is the more remarkable because Dr. Conan Doyle has chosen a period which is for novelistic purposes at once dangerously near to, and far from, the present day. When George IV. was Prince of Wales and the prize-ring had not yet become corrupt, human emotions were no doubt not very different from what they were, are, and will be, but the fashion of expressing them was peculiar to a transitional time, in which greatness and littleness jostled one another in a manner curious enough, and curiously noted and caught by Mr. Doyle. 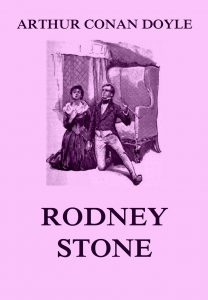 Basics about the book (from Wikipedia):

The eponymous narrator is a Sussex country boy who is taken to London by his uncle Sir Charles Tregellis, a highly respected gentleman and arbiter of fashion who is on familiar terms with the most important people of Great Britain. The novel interweaves Rodney’s coming-of-age story with that of his friend Boy Jim’s boxing endeavors, and a large portion of it deals with the famous bare-knuckle boxers of the late eighteenth and early nineteenth century, such as Jem Belcher, John Jackson, Daniel Mendoza, Dutch Sam, and others. The book includes vignettes of a number of historical personages, notably the Prince Regent, Lord Nelson, Sir John Lade, Lord Cochrane and Beau Brummell.