A Change of Air

A Change of Air – Anthony Hope

A highly clever performance, with little touches that recall both Balzac and Meredith. Mr. Hope, being disinclined to follow any of the beaten tracks of romance writing, is endowed with exceeding originality.

The tragic undercurrent but increases the charm of the pervading wit and humor of the tale, which embodies a study of character as skillful and true as anything we have lately had, but at the same time so simple and unpretentious as to be very welcome indeed amid the flood of inartistic analysis which we are compelled to accept in so many recent novels. 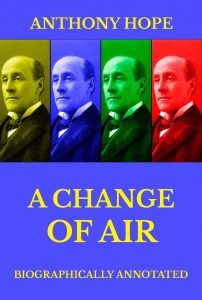 A Change of Air

A Change of Air.