Half a Hero – Anthony Hope

Anthony Hope’s novel, “Half a Hero,” is a study of political and social life in the English colony of New Lindsey, which may possibly be New Zealand. The half hero is one Medland, leader of the radicals, who by a coalition comes into power as premier. He had been a common laborer, had risen by integrity and energy, and although unpolished of manners shows qualities that make the true man. The humor of the situation arises from the necessity forced upon the snobbish family of the titled governor to receive him and his daughter on terms of social equality. Later on it appears that there has been something “irregular” about Medland’s marriage, but when disgrace is threatened and he has the chance to silence his enemies by a skilful distribution of spoils he refuses to submit and dares political death and social obloquy rather than sacrifice his manliness. The end of the story is tragic. 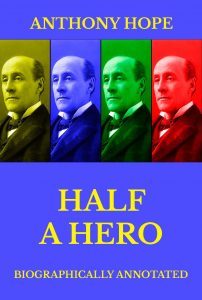