The God in the Car

The God in the Car – Anthony Hope

The story of The God in the Car is of a very special character. Here we find the large canvas of serious life brushed over with a firm hand, relentless in general outlines and details—telling the tragedy of a woman’s love and the price that ambition pays for its own gratification. It is said that a certain English colonial statesman suggested the character of Rushton; we do not know, nor do we care. What we do know, however, is that in this story we meet not one or two, but several, characters that are worth knowing, and whom we will remember for many a day. Juggernaut, “The God in the Car,” is the incarnation of all the qualities and shortcomings of what the French are pleased to call the strugforlifer, and under the wheels of his rolling throne he crushes the woman that loves him, relentless of the ruin and misery he leaves behind. Mr. Hope has shown that quantity is not always detrimental to quality. 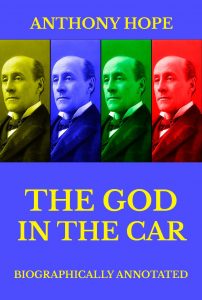 The God in the Car

The God in the Car.